Demigra should have never been able to control Vegeta as he has divine Chi (i like this term better then Ki) by the time the game takes places as he is a Super Saiyan beyond Super Saiyan God. this is becase the demon Chi Demigra uses cannot control beings who have been in contact with or contain divine chi. this is why Goku could not be controlled by the demon god.Guyver92 (talk) 21:50, July 18, 2015 (UTC)

i believe the game takes place in 5-10 years after Buu meaning he would be one in the 7th dimension. we dont know how long after the the Beerus saga Vegeta became a SSG, it could have just been a cupple days after goku became one that Vegeta ascended to the state. it could be argued that vegeta was willingly allowing himself to be controlled by Demigra but considering Babid used a simuler ability on him and was never able to control the proud prince this is unlikely.--Guyver92 (talk) 22:11, July 18, 2015 (UTC)

Shouldn't Vegeta's page have SSJG again? We can assume he changed into one during the time between BOG and RF. —This unsigned comment was made by Rogeta234 (talk • contribs) Please sign your posts with ~~~~ next time!

No need to make assumptions. It didn't happen that we know of. --

Back to Ruthless Vegeta?

So it seems in the new Dragon Ball Super series Vegeta is back to his old ruthless ways. I wasn't quite expecting Vegeta to kill Captain Ginyu in the Super series like that. I guess something happened between the DBZ to Super series with Vegeta, that made him retract to his previous ways of killing without mercy? By the end of the Majin Buu saga... I thought it was apparent Vegeta has softened up and actually saw eye to eye with Goku on things. Clearly not seeing how he has the same attitude he once had from the Cell saga and prior in the new series... I don't know why they brought back a character just for Vegeta to fodder. It was one of those gags that's been there for so long and they decide to cut it off completely. I mainly just need to adapt to the old Vegeta again I suppose. I was thinking the Majin Buu saga Vegeta would eventually grow into the Super series but that was wrong since they're bringing back the cold version of Vegeta. Ripto (Talk) 21:03, January 4, 2016 (UTC)

He's getting a bit cockier, but I agree not evil yet. It's also anime filler, since it doesn't happen in the manga and therefore was not in Toriyama's official plot outline given to the manga and anime producers. --

Yes, Vegeta is getting cockier because he's training with Whis but Toei is the one who is controlling Vegeta so he might not be the same Vegeta you're used to like in Resurrection F or things Toriyama is in control of Meshack (talk) 21:10, January 5, 2016 (UTC)

That's true Meshack, just feels like it was extreme of him since he wasn't really a threat :/

And I forgot about that, it didn't happen in the manga... so technically Ginyu is still alive to manga standards? Should that be noted on his page? I don't recall seeing it listed. If not that's fine. Taking into account Toei is in charge of Vegeta makes sense too. Ripto (Talk) 19:25, January 7, 2016 (UTC)

To an extent, I believe that he is much worse than his GT counter part, for a couple of reasons.  First of all, when he leaves his family for several months on end to go train with Whis without going back to his family, or at least that is what I believe.  Second of all, he gave nearly no comfort to his son, and didn't give any sort of nod or acknowledgement for his son, and the first thing he says to his son since the last time he saw him, which was about a decade ago, was that he probably didn't need his sword anymore.  Really, I think that his social behaviors with EVERYONE except Bulma is at like an all time low, and the relationship with bulma is at an all time high.  Anybody who disagrees with me, protest however you wish.  TNTDiscoCisco (talk) 22:16, July 17, 2016 (UTC)

There's been something made about Vegeta gradually abandoning his Saiyan armour...but since he uses it in Super, could the alternate explanation be put forward that he simply didn't wear his armour because it would have been against tournament regulations? Sanokal K-T (talk) 06:04, March 22, 2016 (UTC)

It was Vegeta's training suit and I guess he never bothered to change out of it for the tournament. Since the Buu Saga takes place in a short time span, he never had time to change after the tournament either. -- • Final Chidori • Talk 16:16, March 22, 2016 (UTC)

How long is the battle of Vegeta vs Hell Fighter 17 in "Dragon Ball GT"?

The tabber is a new feature we're trying out. The tabber allows readers to switch the main infobox image of an article (which are usually anime screenshots) with a manga image. For an example, check the Super Saiyan page. Right under the name displayed on the infobox, there are two buttons. One says "Anime" and the other says "Manga". Try clicking the "Manga" button. This will switch the previous anime image with a manga image. Clicking "Anime" will switch the image back. While it's not extremely fancy, it's a neat little feature that many other wikis use and it could be utilized here as well. Please keep in mind this is a testing session, so if we run into major problems, we can easily revert the pages back. Also note that this feature doesn't work on mobile, so the anime image will always be displayed by default. While the tabber is only on smaller pages right now, I thought it's time to try them out on some of the main pages. Which brings me to my question: does anyone happen to have a colored, full body, manga image of Vegeta in his base form? -- • Final Chidori • Talk 17:31, May 15, 2016 (UTC)

Can someone please put the information of his SBG form back up? 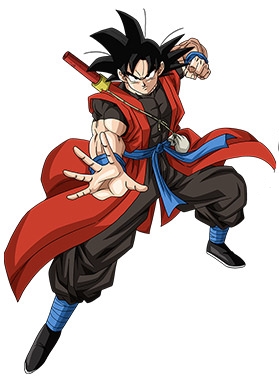 But what did Vegeta look like during his final battle with Goku? And come to think of it what did they mean by their final battle? Did they just stopped fighting after Goku won or what? JokerJay779 (talk) 19:48, July 5, 2016 (UTC)

Dunno.Can't find any images of Xeno Vegeta, though he may make an appearance in Xenoverse 2. Did this take place in DBO? Surprised Goku won, I always thought they would end up in a tie at the end (though DBO isn't exactly "canon") -- • Final Chidori • Talk 22:24, July 5, 2016 (UTC)

Actually I was assuming Goku won that fight that was mentioned. He would have to win eventually and perhaps after winning Vegeta then admits defeat and Goku is now officially the stronger one. Also not sure if any more stuff from DBO or Dragon Ball Heroes would be in Xenoverse 2. Although the Majin twin sisters and General Bon would be cool as bosses. JokerJay779 (talk) 22:35, July 5, 2016 (UTC)

Um to clear all possible confusion, "Xeno" characters are persons working for Kaioshin of time, or freed from Mira's control (Bardock), Vegeta is seen working for Mira now (which makes sense, as Vegeta is a $%& compared to Bardock) as seen here https://www.youtube.com/watch?v=izoiYVfcbUYBH Ouji (talk) 08:09, July 6, 2016 (UTC)

Xeno Goku has been shown in DBH, Xeno Vegeta is not in it yet, though he'll likely just be Black-Masked Saiyan without the mask. The DBO timeline seems to indicate that the final battle between Goku and Vegeta apparently ended in both of their deaths, so I guess it was a draw.--Neffyarious (talk) 12:41, July 6, 2016 (UTC)

But since Xeno Goku and Xeno Vegeta are alive according to Dragon Ball Heroes I guess they got sucked into a Time Rift or something. Or the Time Breakers intervened and captured Vegeta to mind control him and Xeno Goku followed suit. JokerJay779 (talk) 23:53, July 17, 2016 (UTC)

Helping Tien in "No Match for the Androids"

Was Vegeta trying to help Tien in 'No Match for the Androids', or was he attacking Android 17 for interfering (or something else entirely)? - BlitzGundam (talk) 17:44, March 3, 2017 (UTC)

Can someone help me upload this picture to Vegeta's God-enchanced Super Saiyan form?

Vegeta's height is incorrect. His official height is 164cm, which is correctly stated on the wiki, but this translates to 5'3. The current height is listed as 5'5. Can someone please fix this, and make his height 5'3, as is officially stated? VegetaVegetaVegeta (talk) 08:58, August 24, 2018 (UTC)

I was wondering if I could change the anime image for Vegeta. I already tried it twice today, but it ended being countered by another user who says "Mos says you need to discuss image change bfore making them".Wildgirl2000 (talk) 18:31, September 21, 2018 (UTC)

I think the picture you want to add is worse than the current one for various reasons:

He's bloodied and it's just a headshot. Let's try this another way, see if we can find a picture that everyone likes:

I personally thnk that the infobox picture for characters, especialy ones who debuted in the original manga, should be pictures of the offical artwork by Akira Toriyama, even if it has his signature on him. I wouldn't mind if it was changed. Be nice to freshen up the pages a bit. 0551E80Y (talk) 03:37, September 22, 2018 (UTC)

If you can't even point out problems with the current one, I see no reason to change it just for the sake of changing it. If the current one is good, it should remain.

Here's a new photo I'm proposing that the wiki use. It's a good quality image of a classic Vegeta (as many characters have) that is brighter and shows his hair visibly. I think it would make a great replacement for the current image although it isn't a full body image. May crop it later as seen fit.Banan14kab 03:34, March 11, 2019 (UTC)

According to the this

Heroes really shouldn't be displayed in the sagas; it should be in game info. Not only is it non-canon (actually repeatedly stated so) its a game not a manga/anime. Makes the site more concise and keeps the current format all the pages follow.Heartlesslove93 (talk) 06:02, June 13, 2020 (UTC)