hey im not part of this wiki but i like it an i wanna add that during the movie yo song goku an his friends return gives u a leak to the goten a trunks training debate issure in the 10 year between buu an goku leavin to train....while fighting kado vegeta tells trunks to sense his ki because of the kado multiplying an trunks says easier said then then while struggling...an vegeta seems angry an bulma tells vegeta its because you dont train him leading to a clue that trunks has not been training....when gohan tells goten to sense kado ki goten quickly senses him an begins to attack kado....showing that goten has continued his training an kept it up in the 10 year period.

The 10 year period year after goku left im not sure? but it does seem that goku an gohan have kept Goten in training in that 10 year period. 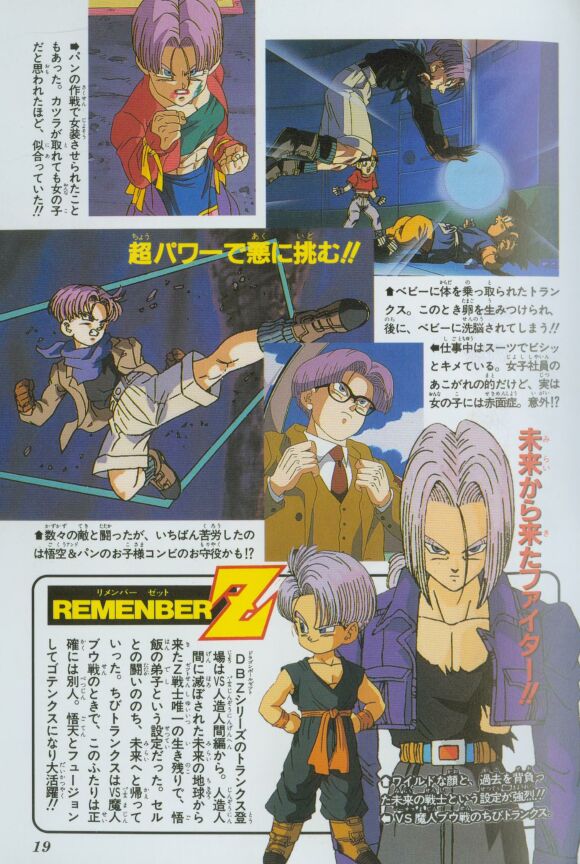 here some scans from trunks perfect FIles GT....see if you guys can get it translated an use the info

The point of making a Future Trunks Page

Why does trunks make such a sexy girl?

Because in real life Trunks is a somo wrestler

I NEED SOMEONE to help me please, i have a question that needs answered. why in the cartoon dragon ball z.. if any one has heard of it, does trunks look an awfull lot like vegeta and nothing like goku? i must admit i am quite stumped on this one..

Please help me, yours faithfly.. boy who cant sleep at night

Uh, if you read this article, then you'll definitely find out. However, if you haven't finished watching the Android Saga, then it might spoil some of the plot for you. --

im wondering because it says trunks hair is gray like his granpas when it is purple.

trunks is the role of Iron Fan princess(female character, see wiki) of journey to the west. he kills frieza(red boy) and king cold(buffalo demon king), metaphysically meaning that Iron fan princess punished her son and husband.

I just would like to say that i think Kid Trunks is the best Trunks in the HISTORY of Trunks. I think the crreator of DBZ is crazy on changing his personality! i love kid trunks but the only thing i donmt like is that he is a girl BASHER!!! LOLZ anyways i love kid trunks HE IS SO CUTE LOL. I hate Trunks During the Baby Saga he is just not well...... Trunks. Plz tell me u guys AGREE???!!!?!?!?

Personaly, I am a Future Trunks fan.

So based on what I've seen of Trunks on the show, I think that there's a strong chance of him being a homosexual. I mean no disrepect and it doesn't change anything about him and it's not like I saying this with no evidence. I mean he's pretty close with his best friend in both the present and future timelines, but unlike goten or gohan he's never seen with or even mentioned to have a date with a girl. And it's not like he had no time to get one, he had 15 years just like Goten did, plus Trunks is rich is he wanted a girlfriend he could fairly easily get one, so there was nothing stopping him from getting one. So that's what I think on that front, and please do just cast this aside because you like him and for some reason his sexual preference would chance that and please don't refute this without evidence. Like I said I still like him, my opinions of his actions don't change because I think this.

Numbuh424 asks how will we eat candy?

Maybe he wanted to live a while before settled down and got married Vegeta took a long time to get married.

Roughly how old would baby Trunks be in the Android Saga? He's definitely not anywhere near newborn as he's seen taking his first steps, which would imply he's at least eight months old or so, but is it ever said, mentioned, whatever, anywhere, how old he is then? Tia-<font color=ise</font><font color= 15:18, February 15, 2013 (UTC) </font>

was that gravity in which they are training really 450? I don't remember if they say which number it was.

i'm not understanding this unknown timeline business. i don't get it Nikon23 23:59, March 18, 2015 (UTC) Clickitycainine (talk) 14:39, April 26, 2015 (UTC)The unknown timeline is the one where Cell kills Trunks to get a time machine and go to the DBZ timeline that we follow early so he can absorb the androids and become perfect before the androids are destroyed by Goku,Trunks or anyone else.Clickitycainine (talk) 14:39, April 26, 2015 (UTC)

So someone mentioned that "This started out as a boast/lie but they officially got together at the end of Battle of the Gods, and are stated to still be together in Resurrection of Frieza. This was confirmed in an interview as well."

Can this interview be linked? I was under the impression the whole thing was just a boast by Trunks, and the scene in Resurrection of F was just Mai trying to threaten Sorbet?

I know the interview you're talking about. I saw it shortly before the dubbed version of Battle of Gods came out. Unfortunately, I don't have the link for that one, but I did find this other one where in it Akira Toriyama says, and I quote, "Some of the characters from Pilaf’s side will fall in love with somebody, so expect it." You can read the full interview here: https://www.reddit.com/r/dbz/comments/1ai1fa/akira_toriyama_interview_on_dragon_ball_z_battle/

And in regards to Mai mentioning Trunks to Sorbet, consider this. If she was going to threaten him, why use Trunks? If they weren't actualy boyfriend and girlfriend, she'd be just randomly mentioning Trunks after 8 months (RoF takes place 8 months after BotG). She'd basically be threantening this evil alien with a CHILD, who Sorbet wouldn't even know (let alone know how strong Trunks is, if Mai even knows), when she hadn't seen him for 8 months. If she were going to threaten him, she'd use or mention someone that could actually pose a threat, not use someone she met practically a year ago that Sorbet never even heard of. But she mentions him because they really are in a relationship, is in contact with him, and knows how strong he is.

And another thing, lost of fans say that Mai never makes an appearance in the 10 Years After Kid Buu epilogue for DBZ, and use it as proof that Trunks and Mai don't get together, or at least break up. However, in the original Japanese dub, just before Pan shows up for the first time, Trunks mentions that he does have a girlfriend. This was cut out of the English dub though. So fans can no longer use that as proof, because even though Mai's is not seen, Trunks does indeed have a girlfriend. And with the evidence in both the anime and the confirmation by Akira Toriyama, this does imply that Mai is that girlfreind. In a way, Trunks will be following in his mothers footsteps by falling for a former villain. That actually seems to be a running theme in the show any. Bulma/Vegeta, Krillin/18, Tien/Launch, etc.

Anyway, it seems that the only ones opposed to the Trunks/Mai relationship are Trunks/Pan shippers, Trunks/Goten shippers, and those that find Trunks/Mai to be creepy since she's technically much older than him.

He said there'd be a small romance, he didn't say they'd end up together in that interview.

Well in the subs I saw, she threatened him by saying her boyfriend Trunks will come after Sorbet. As to why she'd use Trunks to threaten, well, Mai has shown many times she can be rather silly like the rest of the Pilaf Gang.

The relationship doesn't even come up in Super so far. Anyway show me the interview when you can.

While Trunks has some personality traits that resemble his dad he has much more that resemble Kakarot, which makes no fucking sense at all. Goten has the exact same as his dad but he wasn’t in either of their lives. Yo what the fuck, Toryiama Johan Lokir Rodrickson (talk) 16:01, October 5, 2018 (UTC)

Retrieved from "https://dragonball.fandom.com/wiki/Talk:Trunks?oldid=1867824"
Community content is available under CC-BY-SA unless otherwise noted.