Is there any rationale in using the dub name as opposed to his actual Manga-approved name. Paikuhan is a pun on Paigu Fan, which is a type of food. I dont see what is so hard to understanda bout using Manga Names for the DB wiki. The Main Wiki uses the proper names, so why cant the DB wiki... 205.209.70.128 08:30, 8 December 2007 (UTC)

The names all over the wiki are chaotic at the moment. It hasn't been under constant watch, and there is no list of names here to let those who are watching the RC know when someone is converting to a name that the previous consensus decided not to use. So we've started a new discussion and for the first part we're creating a full table with all the character names in the different versions of the series. Feel free to help out at Forum:Naming Scheme if you want to see names changed around here. ~NOTASTAFF Daniel Friesen (DanTMan, Nadir Seen Fire) (talk) Dec 8, 2007 @ 08:55 (UTC)

There was no manga approved name, because Pikkon doesn't appear in the manga, he is a filler character. Arieus 08:08, February 2, 2010 (UTC)

Was Pikkon actually stronger than Cell in most powerful form? Or was Cell weaker after death than when he fought in the Cell Game. How could he eaisly defeat Cell but fight equally with Goku when Goku is considerably weaker than Cell? Or is it just something that does not make any sense because it was filler only?

He is stronger than Cell, as if Goku after training for a long while after Cell's defeat. --

It is hard to say. Pikkon got him with a surprise attack. After Goku said "Well, I was right about one thing: you didn't need my help", Pikkon says "No, I didn't. But thanks anyway". IMO, I would think that he is (plus the fact he pretty much outmatched Goku in their fight, meaning he is stronger than both Goku and Cell) SaiyanZ 23:00, February 24, 2012 (UTC)

There isn't even a slight doubt about this. Pikkon is much weaker than Cell. The only reason why he managed to beat kick him was because the filler's creators wanted to show a "mighty" opponent in front of Goku and reserve their encounter for the final confrontation.
Cell (as Super Perfect Cell at the time) has the strength of a Super Saiyan 2. Goku could barely fight against Cell back when he was only at his Perfect Fom. There's no way a lame character like Pikkon who lost to SSJ Goku could confront Cell. That was the luckiest day of his life.
But anyway, Pikkon is a filler character. Don't bother too much about his strength, you can't define it precisely.
Darkness2179 (talk) 16:37, September 7, 2012 (UTC)

It would seem throughout the series that villains and evil-doers, are restricted from growing in power or training while they are dead, or imprisoned in HFIL/HELL. However, we have clear evidence, of multiple cases where good characters or Z fighters, such as Goku, and perhaps Yamcha, Tein, and Choutzu, all seem to be able to train and grow in power while deceased. That being said, Pikkon is revered as a good character, and thus noting these observations, it would make sense that he would be able to grow in power and continue to train to increase his skills and power, despite being deceased. In conclusion, when Pikkon does take out Cell, it's been a fair amount of time since he had battled with Goku in the tournament, and after that battle, it's hard to believe Pikkon wouldn't have increased his training to attempt to surpass Goku, as Pikkon is very competitive in nature, similar to Vegeta even. I don't think it's far fetched to think Pikkon could best Cell, though clearly one would expect a more even match, and it is made blatant that Cell was taken by surprise with Pikkon's power. Overall though, it does seem as though HFIL/HELL has a suppressive effect on the abilities of the bad guys, and that could very well play into it. Overall though, I believe even if Pikkon wasn't/isn't more powerful than Cell, he had/has the potential to be so. Condescending him and mockingly saying he got lucky seems quite far off from the thruth, to be completely honest. 67.60.20.67 13:07, April 11, 2013 (UTC)

I'm sorry if I presented my criticisms along with mockingness.
The truth is I really don't like this character and thats my own opinion.
Taking that aside, I didn't quite understand what you are trying to say.

Yes, one can assume that after a battle, any "good" character like Pikkon might start training to increase his power level. But you got a little confused with the Time Line here.
Pikkon fought Cell before the fight with Goku, not after. Actually, the set up for their encounter is the fight we are talking about.
In other words, Pikkon had the chance and is strongly suggested that he did get stronger before the fight with Goku, and yet he still loses to his Full Power Super Saiyan form which is far inferior to Cell.

Although never mentioned officially, I liked your theory where villains have thei power supressed in Hell. This could work very well as countermeasure for any possible flee attempt.

Yes and no, Paikuhan IS stronger than Super Perfect Cell, however, since he was created by Toei, he must be weaker than Goku (which doesn't make sense anyway, since i doubt Super Kaio-ken Goku can beat up Super Perfect Cell).

He has clothes similar to his master the West Kai in both form and color. In fact all the Kais have similar clothes except for the color, and East Kai and South Kai have different shoulders than the others. See the gallery below: 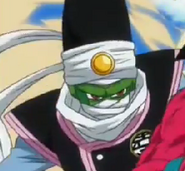 South Kai
Add a photo to this gallery

No info. Only info we have is that Mijorin died after fighting with evil aliens and Sarta died because of asteroids.

Depends on your opinion on canon, since there isn't an official canon.

Retrieved from "https://dragonball.fandom.com/wiki/Talk:Pikkon?oldid=1537990"
Community content is available under CC-BY-SA unless otherwise noted.