"She sneezes to such things as flowers, pepper, and dust, which are three things that only make people who are allergic to them sneeze." Whoever wrote that has no clue what they are talking about. Pepper will make anyone or anything sneeze. I always thought it was fake like the banana peel being slippery...until I took a big wiff of it. Also I never even knew you could be allergic to dust, but when I was at college and we went into some of the dusty workshops, there was a sneeze like every 10 minutes and a few coughs too. The only thing that I've not seen make me or others sneeze IRL as easily as TV make them seem they would, are flowers. Infact I've never sneezed from a flower. So I think this needs to be fixed unless some citation can be made.

she appears in dragon ball to the end, after that she basically dissappers albeit to a few minor cameos in the beginning of dbz, but that's only in the anime. what episode does she appear in a flash back during the goku vs frieza battle. plz help

You know how Launch has two different personalities? Well, do you think we should have the ability to switch between the two on her infobox image, like they have on the Avatar Wiki, that lets you switch between Human and Naavi. Anyone else think this is a good idea?

ponds11 will break your neck 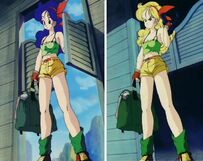 It looks good on the page. Could be a little better quality though. :P

I think Bulma and Launch should be refered as best friends in Dragon Ball.

Retrieved from "https://dragonball.fandom.com/wiki/Talk:Launch?oldid=676252"
Community content is available under CC-BY-SA unless otherwise noted.