The references on this article are kind of a mess with all the superscript mixed in with the citations. I don't know enough about the game to match the references to their citations, but if someone does, I'd be happy to assist in formatting them properly. --

Has anyone else seen the picture from Budokai Tenkaichi 3 where Bardock's about to transform at the Cell games at night? Why wasn't the stage actually added to the game?

The chart says that there is a character titled "Vegeta (GT)" with SS, SS4, and SS4 Gogeta transformations when it is really a character called "SS4 Vegeta" with SS4 Gogeta as its only transformation, and it and Future Gohan's spots should be swapped. I suck at editing charts, so can someone fix this? GuyNamedSean 08:01, 15 June 2009 (UTC)

Should a separate page be made for the unique dialogues instead of putting them all in the trivia? Maslego 23:31, June 6, 2010 (UTC)

It should not be on the page, and it does not need it's own page. Our articles are brief summaries of their subject, and a brief summary does not require a list of all dialogue in the game. --

Which browsers does the scroll box not work for? --

In BT2, the characters could only fire Blast 2 after a regular punch and kick combo and doing so putted them out of the Max Power mode. In BT3, for the Blast Combo, characters can fire Blast 2 after Heavy Finish/Heavy Crush, Rolling Hammer, and other combo tecnique but they can't use it after punch and kick combo and using Blast Combo doesn't put them out of their Max Power mode.

Right. So it's not a new move, it's just slightly different conditions. Also, it sometimes puts them out of max power, it just depends on the energy. Since this is a minor change, and definitely not a new attack, we should not be listing it as a new attack. --

Supreme Kai's and Piccolo's names at the tournament

My BT3 is the PS2 version. Here says that their names are changed into Shin and Majunior, but in my game they don't. User:Super Saiyan 7 Somebody said that his version is the Wii and the names are ok. So maybe the names change only in the Wii version?

Can anyone with the PS2 version try this too?

Would anyone be able to verify that this sentence from the Italian localization (taken from the last bullet under trivia) is an exact quote? Aside from the inconsistency involving Majin Buu, there's an extra "attack" and I want to know if it's supposed to be there.

I fixed the grammar issue. The author only mentions the character named as inconsistent, so I assume the "attack special attack" part was just a typo. --

Where did this pose come from? 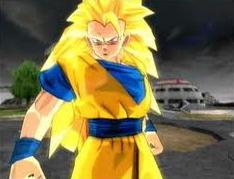 Looks like a winning pose after defeating the opponent. Just a guess based on having played the game a lot. --

It could just be him looking at the opponent. --

Should I add photos for everything in BT3 that isn't listed on its right page? I feel like adding Gogeta's ultimate impact. — A (t • c)

I don't understand what you are asking. What does it mean for something to be "listed on its right page", and what does that have to do with images? --

Forgot about this, guess I'll just leave this here.

Polls are interesting to look at, but keep in mind that they do not constitute a consensus if there is ever a dispute (not that that is the case here). The problem with them is that users can vote anonymously as many times as they like if they just cycle their IP address. --

Yeah, I noticed that some time back, but I like to use them to so keep tallies of votes. But one of the problems is sometimes people will either forget what they voted for and revote, cheat, or vote without really discussing it. -- — A (t • c) 00:40, June 5, 2014 (UTC)

Indeed. In very rare cases, like when there are 10 people on both sides of a very important issue with no single, clear, logical answer and no consensus after a month or two of discussion, we have had to go to a vote before. An example might be deciding between 4 images for Goku's infobox image. When we have to hold a vote that is going to be the ultimate deciding factor, we have a topic header for the question, then subtopic headers with the voting choices to put your signature as your vote. That way everyone only gets one vote, and we can doublecheck for any kind of cheating. --

Why Vegetto Blue appears in the video's thumbnail?Yon!米津愛主！

Retrieved from "https://dragonball.fandom.com/wiki/Talk:Dragon_Ball_Z:_Budokai_Tenkaichi_3?oldid=1602841"
Community content is available under CC-BY-SA unless otherwise noted.