I know Dodoria's talk page was deleted, but I need to ask. Since he appears in Dragon Ball: Episode of Bardock, should he have an other appearences section?

We don't necessarily need an entire section for this tiny information, otherwise we'd have to put the same section on Zarbon's article as well. Since it is stated on the article already though, we can't repeat it. Or we can create this "Other appearances" section on both character articles and keep this information there. Either way, it works out fine as long as we don't repeat the information more than once on each respective article. -

Hello, wikians. Looking at our choice of infobox image for Dodoria, it's a bit bland, right? Well, I thought so: so here's a few suggestions on what I believe are better options. Please let me know if you like any of the following images.

Just a simple, but cool one to me. A good view on his impatient side, and his love of fighting with the clenched fists. #1 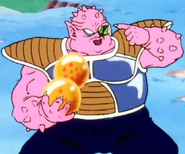 A good view on his evil / sadistic side #3

One of the only full body shots I could find. Not top quality, but it'll do just fine in a 250px infobox #4 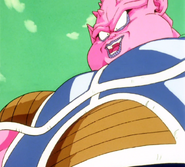 Another fun one. Too bad it couldn't fit in his entire head in the shot. #5
Add a photo to this gallery

Let me know what you guys think! --

I think the first image is the best of your options, high quality, and a decent amount of his body is shown! The Odd Musketeer 00:27, December 12, 2012 (UTC)

Cool! Those were my two favorites as well. Number 4 is definitely my first choice, but if the quality is too big of an issue, then I think number 1 would be the way to go. --

I think #3 would be the best choice, followed closely by #1.

Incorrect trivia: the first villain to appear in the TV special is Nappa

Dodoria is not the first villain to appear onscreen. The first villain to appear onsceen is Kid Buu (and Bibidi). He is shown in a flashback during the Kid Buu Saga, while Dodoria is shown in a TV special which decribes events that take place long after the Kid Buu flashback in the DB chronology. As to which is more canon to the manga, the flashback depicts events described in the original manga, while the TV special is an original story created by Toei Animation. Also, why excluding the Saibamen, Kid Vegeta and Nappa from the TV special, Nappa remains a villain even until the end of the series.

Note: Kid Vegeta is not a villain and Saibamen aren't really villains either. Nappa is the only one there that can remotely be used to defend this and even he is only in the TV special and not in the manga chapter. -

They're not in the original manga when Frieza remembers the destruction of Planet Vegeta and Bardock is shown. Read it again: http://www.mangareader.net/105-2956-1/dragon-ball/chapter-307.html. Also, you're excluding Bibidi and Majin Buu for no reason.

People who switch sides MUST be excluded from the equation. Fat Buu is never a villain and merely a temp antagonist, as were the likes of Piccolo and Vegeta. Kid Buu is an insane maniac as well, but his fate differs him from being a villain as he's reincarnated as Uub; which automatically makes his essence NOT a villain. The actual embodiment of a villain is someone who does not change along the way and remains evil through the end, staying as such and dying in the process without being redeemed or anything of that caliber. F, Z, and D are the only ones that fit this equation (if you don't look at Nappa)... but this is also what Toriyama said in one of the interviews as Frieza would remain his first appearing villain in chronology. The conception of Buu is merely a non-manga appearance in chronology. The only argument here is Nappa's half-appearance and even that holds little merit to the connector in the final GT episode. -

Retrieved from "https://dragonball.fandom.com/wiki/Talk:Dodoria?oldid=1541028"
Community content is available under CC-BY-SA unless otherwise noted.