Tambourine uses this attack to kill Giran. After Giran manages to strike Tambourine in the face with his large powerful tail, Tambourine retaliates by using the impaling part of the attack. Tambourine later attempts the technique on Yamcha, but King Piccolo interrupts and orders him to find and kill the one who killed Cymbal.

Tambourine uses the Super Marengeki as his Ultimate Blast in Dragon Ball Z: Budokai Tenkaichi 3, however, it is extended into a rush attack and the impaling technique is used at the end of the move. He also uses it in Dragon Ball: Revenge of King Piccolo. 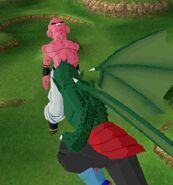 Super Marengeki in Budokai Tenkaichi 3
Add a photo to this gallery
Retrieved from "https://dragonball.fandom.com/wiki/Super_Marengeki?oldid=1899900"
Community content is available under CC-BY-SA unless otherwise noted.