First, Vegeta holds his hand forward up at a 90 degree angle like the normal Big Bang Attack, but charges it with more power. Then, he shouts "Try on my move, Super Big Bang Attack!" and fires the attack at the opponent, inflicting a huge amount of damage.

Vegito uses a similar attack on Super Buu to damage his head.

Super Big Bang Attack appears in Dragon Ball Heroes, where it was added in Universe Mission 5 as the Super Attack of SSGSS Vegeta (BR). It can also be used by Hero Avatars of the Hero type after raising Vegeta (BR)'s Camaraderie level to Lv3. 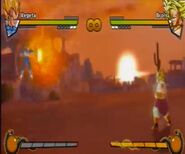 Vegeta fires the Super Big Bang Attack at Future Trunks
Add a photo to this gallery
Retrieved from "https://dragonball.fandom.com/wiki/Super_Big_Bang_Attack?oldid=1918164"
Community content is available under CC-BY-SA unless otherwise noted.