"The Fall of the Saiyans"

Strongest Form 1 (最強形態１, Saikyō Keitai Wan) is a transformation attainable by a Saiyan or Earthling-Saiyan hybrid who has been completely dominated by a Tuffle parasite.

In this state, the Tuffle-Saiyan's hair retains the silvery-white color they possessed in their previous Tuffleized Super Saiyan state. However, the hair becomes much more rigid and spikier, similar to that of Super Saiyan 2.

Additionally, the user gains an increase in muscle mass that rips apart their shirt, their eyes being covered by blue visors, red lines sprawling across their chest and forehead, and the acquiring of large metal-like wings.

Oren achieved this form after taking over Vegeta (in his Super Saiyan Blue form in the manga).

Baby Vegeta attained this form during his battle with tail-less Goku; after the possessed Gohan, Trunks, Goten, and Bulla all used the Circle of Power technique to give their energy to him.

Baby Vegeta appears with this form in most of his video game appearances. Baby Trunks and Oren Vegeta possesses this form in Dragon Ball Heroes. 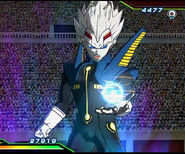 Retrieved from "https://dragonball.fandom.com/wiki/Strongest_Form_1?oldid=1915320"
Community content is available under CC-BY-SA unless otherwise noted.