Sora (ソラ, Sora) is a character in the Dragon Ball Heroes universe who acts as a Capsule Corporation battle guide. He is portrayed in real-life by the actor Kei Hamasaki (浜崎恵, Hamasaki Kei).

In the spin-off manga Dragon Ball Heroes: Victory Mission, Sora works in an arcade in Satan City. Sora seems to know Beat well and tells him to try Galaxy Mission 4. He then sends the boy into the Dragon Ball Heroes game, where he has to face the evil Baby Janemba. When the boy asks who this character is, Sora tells him that it is the result of Baby infecting the pure evil being Janemba.

Later, when Beat faces Baby Vegeta, Sora tells the boy about the summoning cards and gives him one to summon Luud. He is in the arcade when Note and Beat have a friendly Dragon Ball Heroes battle. Later, it is revealed that Sora is the one who told Note that Beat has never been a contestant in a Dragon Ball Heroes tournament.

Sora determined that the one to unleash the Shadow Dragons would be Dr. Auto. He has constantly been pursuing Dr. Auto, who, while conducting peaceful research, had also gathered the seven Dragon Balls, and locked him inside a Dragon Ball Heroes battlefield. While the second round of Beat's second tournament participation gets underway, Sora had to go back to his and Beat notices that he is missing. The Battle Navigator Tsubasa, who is Sora's replacement, and the Battle Princess Momo-chan look over the proceedings in real world and comment on this being the world Sora was in. When smoke billows forth even in the normal world, the Capsule Corporation engineer Yoshito-kun remarks this is "just as Sora said."

After most of the Shadow Dragons are defeated by the Dragon Ball Heroes, and Super Saiyan 4 Broly steals all of the Dragon Balls, Sora appears to the Heroes and opens a portal into a "White Room" for Beat to train in order to become strong enough to defeat Broly. 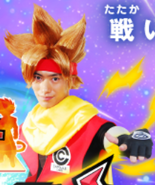 Tsubasa, Sora, Momo-chan
Add a photo to this gallery

Retrieved from "https://dragonball.fandom.com/wiki/Sora?oldid=1851460"
Community content is available under CC-BY-SA unless otherwise noted.