Goku, with his precision and strength augmented by his Ultra Instinct forms, delivers a powerful punch that launches a massive shockwave from the vibrations of his fist. The shockwave is capable of crossing great distances upon execution.

Ultra Instinct -Sign- Goku first uses the Soaring Fist against Super Saiyan Kefla during the anime version of the Tournament of Power. Though Goku's Ultra Instinct Sign state notably decreased the decisive force of his attack, it was enough to visibly injure Kefla and leave her shocked.

Later into the tournament, Goku, in his complete Ultra Instinct form, uses a far stronger version of the Soaring Fist against Jiren with the Pride Trooper taking serious damage from the rapid blows thanks to Goku's vastly increased power.

In the manga, Goku uses this technique against Moro. 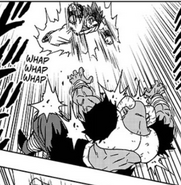 Kefla getting hit by the Soaring Fist attack.
Add a photo to this gallery
Retrieved from "https://dragonball.fandom.com/wiki/Soaring_Fist?oldid=1909821"
Community content is available under CC-BY-SA unless otherwise noted.