This section, or a part of it, has been transcluded from Warriors from Universe 6!; any changes involving it should be made there instead. /

Ever since Goku became Earth's greatest hero and gathered the seven Dragon Balls to defeat the evil Boo, his life on Earth has grown a little dull. But new threats loom overhead, and Goku and his friends will have to defend the planet once again in this continuation of Akira Toriyama's best-selling series, "Dragon Ball Super"![1]

The greatest warriors from across all of the universes are gathered at the Tournament of Power. Kale, a Saiyan from Universe 6, is on a rampage that's leading to the erasure of one universe after another. Meanwhile, Goku and the five remaining fighters from Universe 7 are still intent on surviving the battle and saving everything and everyone they know![2]

This section, or a part of it, has been transcluded from Zero Mortal Project!; any changes involving it should be made there instead. /

A long, long time ago, Son Goku left on a journey in search of the legendary Dragon Balls—a set of seven balls that, when gathered, would summon the dragon Shenlong to grant any wish. After a great adventure, he collects them all. Later, he become the apprentice of Kame-Sen'nin, fight a number of vicious enemies, defeats the great Majin Boo and restores peace on Earth. Some time passes, and then Lord Beerus, the God Destruction, suddenly awakens and sets out in search of the Super Saiyan God. Goku, by becoming that Super Saiyan God, manages to stop Beerus from destroying Earth and starts training under him with Vegeta. One day, Future Trunks appears hoping to save the future. Goku and Vegeta travel to his future, but they soon find themselves struggling against Goku Black and Zamas from the parallel world. Things get even worse when Goku Black and Zamas perform Potara fusion to become the immortal God Zamas! With little hope, Goku ends up asking for help from the Lord of Everything, who erases the entire future world, along with Zamas. After some time, the Lords of Everything hold the Tournament of Power, where all losing universes are to be obliterated. Goku's team from Universe 7 has already lost four fighters. Can the remaining six defeat some of the strongest warriors from neighboring universes?![2]

"I'm a huge fan of certain "magical kingdom" and all its movies. There's just nothing that can compare to that sense of joy, wonder and euphoria. Maybe someday they'll make a Dragon Ball Land too…"[2]

Info below, bar "Supporting", is retrieved from Viz Media.[2] 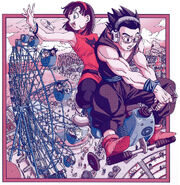