Shun Shun (シュンシュン, Shun Shun)[2] is a Majin, and a high-ranking member of the Dark Empire, though she later defected to the Demigra Army. She possess high offensive capabilities, as opposed to her sister's tactical skills.

Shun Shun appears as a green female Majin with Time Breaker Battle Armor similar to Mira and Churai's. She also wears a gold infinity symbol hair clip like the one Towa wears.

Like her twin sister, Shun Shun is an evil female Majin and member of the Time Breakers. However she relies more on her superior offensive capabilities than her sister who relies on her tactical skills due to her offensive capabilities being weaker than Shun Shun's. She has a bad relationship with her sister despite both being members of the Time Breakers and both defected to the Demigra Army.

Additionally in the games, they often fight together as a team similar to the brothers Frieza and Cooler who are also known to have a bad relationship, though are capable of working together.

Shun Shun is the twin of Haru Haru, however she has a bad relationship with her sister, at some point the two joined the Time Breakers.

Shun Shun took part in the war between the Time Patrol (allied with the Dragon Ball Heroes team) and the Dark Makai army.

Main article: Demon God Demigra Saga Shun Shun and the other Time Breakers are all present as Towa prepares to talk with them, when suddenly Mechikabura appears, causing them all to quickly bow to him.

In the game, Shun Shun appears as part of Demigra's invasion force.

Shun Shun was described as possessing high offensive capabilities - greater than her sister's - and was a high ranking Time Breaker, suggesting she possessed high power. 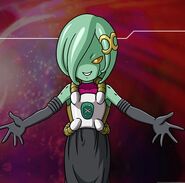