Shockwave from the Fingertips

Shockwave from the Fingertips (, Yubisaki Kara no Shōgekiha[1]) is a kiai barrage technique utilized by Frieza in his third form in the manga.

In the anime, Frieza instead uses an extremely similar technique.

Frieza repeatedly flicks the index and middle fingers on both of his hands in the direction of his opponent, firing multiple kiais at the opponent at a very rapid rate, inflicting a great deal of damage.

Frieza uses this attack during his battle against Piccolo. The attack is too fast for Piccolo to dodge or even see and he is left severely beaten. However, Gohan soon explodes with rage and attacks Frieza with a Wild Rush Blaster, saving Piccolo from certain death.

In the manga, after taking his second form, Frost uses a single Shockwave from the Fingertips against Goku, hitting the Saiyan in the head and knocking him back slightly. 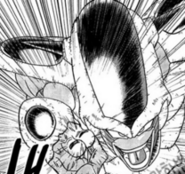 Retrieved from "https://dragonball.fandom.com/wiki/Shockwave_from_the_Fingertips?oldid=1946742"
Community content is available under CC-BY-SA unless otherwise noted.