Demigra and Robelu prepare the Shadow Dragons on-board Shirogame's fortress for the invasion of the Time Nest. Demigra and his allies deploy from Shirogame during the invasion, with the giant turtle participation in some battles with the Time Patrol utilizing it's energy beam attack. 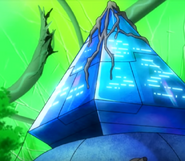 Upper area of the fortress

Shirogame prepares it's beam
Add a photo to this gallery

Retrieved from "https://dragonball.fandom.com/wiki/Shirogame?oldid=1890625"
Community content is available under CC-BY-SA unless otherwise noted.