The user prepares a ball of fire in their hands and throws it, tossing the fireball at the opponent to severely burn them or worse. The user sometimes moves in a sideways direction after firing the attack.

Vegeta used this attack multiple times in his battle against Goku, but the lower-class Saiyan evaded most of the attacks with his Kaio-ken technique. Only one fireball managed to graze him.

In Dragon Ball Z: Fusion Reborn, Vegeta uses a similar attack on Janemba, but this time it is blue.

Shine Shot appears in Battle of Z as Vegeta's Blast Spark. It also appeared in Idainaru Son Goku Densetsu and Dokkan Battle, where it is named Slash Swing (スラッシュスイング, Slash Swing) and consists of two Shine Shots, followed by a Double Axe Handle in the former game. It receives the name Shine Shot in Dragon Ball Xenoverse, where it appears as one of his attacks in most of his forms, including Super Saiyan 4. Choosing Vegeta as a master will allow the Future Warrior to learn the move. Vegeta also has an Energy Barrage version of the technique called Finish Breaker. 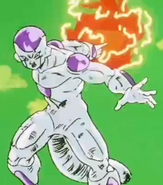 Vegeta uses the attack in Battle of Z

Retrieved from "https://dragonball.fandom.com/wiki/Shine_Shot?oldid=1924212"
Community content is available under CC-BY-SA unless otherwise noted.