Scratch, also called Tama (タマ, Tama), is Dr. Brief's cat. It is frequently seen on Dr. Brief's shoulder (much more often in the anime than in the manga) and does not play a major role throughout the Dragon Ball series.

According to Dr. Brief, Scratch has had four years of experience with capsule technology. Although it is uncertain just how experienced Scratch is with the technology, Brief seems to hold its knowledge in high regard, as he assures Chi-Chi "No one can troubleshoot a frozen osciphilator like we can".

Apparently, Scratch seems to take a liking to Android 16, crawling to his shoulder when he pets him during the ten day time period before the Cell Games.[1]

Scratch appears in the short film Goku's Fire Brigade, where his appearance is different and is Bulma's personal pet that lives with her in her apartment. Scratch was hungry causing Bulma to not focus on her cooking. When an earthquake happened Bulma fell and got knocked out from hitting her head on a dresser while Scratch cried and licked her while the apartment caught on fire. When Goku came up he had Bulma hold onto his Power Pole while it retracted and Goku saved Scratch. In the end Scratch got reunited with Bulma and licked her out of happiness. 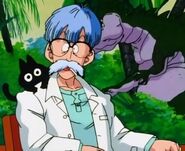 Scratch with his future counterpart

Scratch's face and Japanese name on a truck in Dragonball Z: Lord Slug
Add a photo to this gallery

Retrieved from "https://dragonball.fandom.com/wiki/Scratch?oldid=1917555"
Community content is available under CC-BY-SA unless otherwise noted.