A bulky, handheld optic device used to assess combat power. Similar to their modern counterparts, the Scout-Scope was capable of identifying the combat power of a target by displaying a numeric value on screen.

Unlike Scouters, this device seems to be capable of switching between night vision, and thermal vision, signifying that the design was more likely meant to help a soldier see, rather than designate targets. They can also double as sniper scopes as shown by their use by Saiyan Army Snipers.

They were used by the Saiyans before receiving the Scouters from the Frieza Force.

Paragus uses a Scout-Scope to search for his son Broly on Vampa. 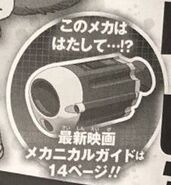 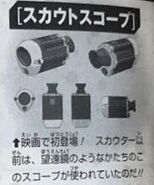