Dragon Ball Wiki
Register
Don't have an account?
Sign In
Advertisement
in: Characters, Characters who can fly, Majin,
and 5 more
English

Salaga (サラガ, Saraga), the Majin Berserker (バーサーカー, Majin Berserker), is an Earthling who utilizes the advanced time travel technology of the Dragon Ball Heroes machines, allowing him to become a Majin.[1]

Majin Berserker is one of the Majin classes in Dragon Ball Heroes. This class has a similar appearance to Kid Buu.

He wears a dark suit of Majin Armor, including a crown with a single horn and spiked shoulder pads, gauntlets, and boots. His trousers are similar to Kid Buu's but are yellow in color.

When Kabra and Abra arrive at a desolate battlefield to find the Shadow Dragons and rescue the three Android heroes, the Majin Berserker appears and tells him it is the Sacred World of the Kai of long ago. The Majin Berserker introduces himself as Salaga, and says that he must be Nobra. Kabra angrily corrects him. Salaga asks him if he likes the place, but Kabra just wants to know why it is so beat-up if it is really the Sacred World of the Kais. Salaga is surprised he, a Majin user, does not know: this was the place where, long ago, the Supreme Kais fought with Majin Buu and lost. In other words, it is like the place where Majin began; the perfect Age for two Majin avatars to fight it out. Kabra has no interest in fighting, since this is not really the time with everything that is going on. Abra recommends that Salaga go home, but he has no intention of doing so. As Abra chastises Kabra for slipping into an "I-want-to-go-home" rant, Salaga bring out his cards: Kid Buu, Piccolo, and two incarnations of Super Buu (base and Gohan absorbed). His headpiece then breaks to reveal the cracked Three-Star Dragon Ball, as it dawns on both Abra and Kabra that he is evil. Abra's banter from inside Kabra's headpiece has not escaped Salaga's notice, and he correctly identifies the cat as a Neko Majin. Abra retreats inside, as Salaga laughs maniacally.

Salaga then begins battling against Kabra by knocking him down with a heavy punch and scares him by licking Abra. He follows up by clicking his fingers and having Super Buu (who has now absorbed Piccolo) to attack. Super Buu (with Piccolo absorbed) uses the Mystic Attack to smash Kabra into the ground and steal Abra, and then throws Abra onto a rock. Before Abra hits the rock, Kabra saves him, taking on a new suit of armor. After Super Buu (w/ Piccolo absorbed)'s attack on Abra, Kabra decides it is time for his pet to enter the battle against Salaga and his team, and then Abra transforms into a larger form, a Neko Majin V, shocking Salaga.

Main articles: Class-up and Majin Armor Salaga possesses the Class-up state throughout most of his appearance in Victory Mission.

The Majin Berserker can use the Class-up state in-game of Dragon Ball Heroes. This state is comparable to the Super Saiyan 2 level of power and gives his armor a slightly different look, with two horns now rising from his crown and a small cape on his waist.

Main articles: Super Class-up and Majin Armor While under the possession of Eis Shenron during his battle with Kabra, Salaga utilized the Super Class-up in response to Kabra having previously done the same, and then having gained backup in the form of Neko Majin V and Viola.

The Majin Berserker can use the Super Class-up state in-game of Dragon Ball Heroes. This state is comparable to the Super Saiyan 3 level of power and adds a cape and purple tips to the spikes on his armor.

The Majin Berserker can use the God Class-up state in-game of Dragon Ball Heroes. This state is comparable to the Super Saiyan God level of power and changes his armor once again. He gains a crown with much smaller horns, and his armor now covers his full upper body in the front and back, with the cape and many of the spikes disappearing. He also gains a row of three smaller antennae in place of his one larger one.

The Majin Berserker can use the Super God Class-up state in-game of Dragon Ball Heroes. This state is comparable to the Super Saiyan Blue level of power. His armor in this state becomes more spiked, though his crown now only has two small horns above his eyes, and his torso is now exposed while his sides are protected. He also now has a row of five antennae in this form, and his irides and pupils turn blue.

The Majin Berserker can use the Ultimate Class-up Sign state in-game of Dragon Ball Heroes. This state is comparable to the Ultra Instinct Sign level of power, and is the only Class-up state that doesn't change his appearance. 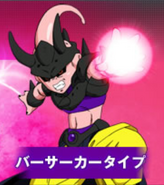