Back to page
View source

The Saiyan-Tuffle war is the name given to the ten-year-long civil war waged by the Saiyans and the Tuffles over control of Planet Plant.

The Tuffles, a very peaceful, yet technologically advanced race shared their planet with a very primitive, barbaric race known as the Saiyans. In the Dragon Ball GT Perfect Files and the Super Exciting Guides, as well as from bits and pieces revealed by Baby, King Kai and Vegeta, it is revealed that the Saiyans themselves actually originated on the original Saiyan homeworld. By unknown means, the Saiyans either acquired or built many spaceships which brought them to the Tuffle home world.

It is explained by King Kai, and later by Baby, that the Tuffles had used their technological skills to construct and live in great cities. However, King Kai states that the Saiyans on the other hand, lived in small primitive villages in the outskirts and badlands of Plant. He also explains that although they shared the same planet, the two races rarely confronted each other and stayed relatively peaceful for many years. However, after a while, the Saiyans began to grow tired of living in filthy primitive villages (as well as allegedly being treated like slaves, from what Vegeta mentioned), and so it was devised that they would start a great war for the planet against the Tuffles.

The start of war

Led by the command of the great King Vegeta, the Saiyans, using their great power and brute strength, attacked the Tuffles. Although physically the Tuffles were much weaker and smaller than the Saiyans, they had advanced weaponry and technologies at their disposal. As the war waged on both the Saiyans and the Tuffles each won their fair share of battles, and for the next ten years, the horrible war waged on.

As the war continued with no end in sight, something occurred that brought the conflict to a quick and violent end. When a full-moon appeared on Planet Plant, something that only happened every 100 years on the planet (seven to eight years in the original English dub), the Saiyans transformed into Great Apes. This transformation greatly increased their power, and within a few short hours, they completely annihilated the Tuffles from the face of the planet, thus ending the war. The Saiyans then claimed the planet as their own, and it was renamed Planet Vegeta after their great leader who had led them to victory. 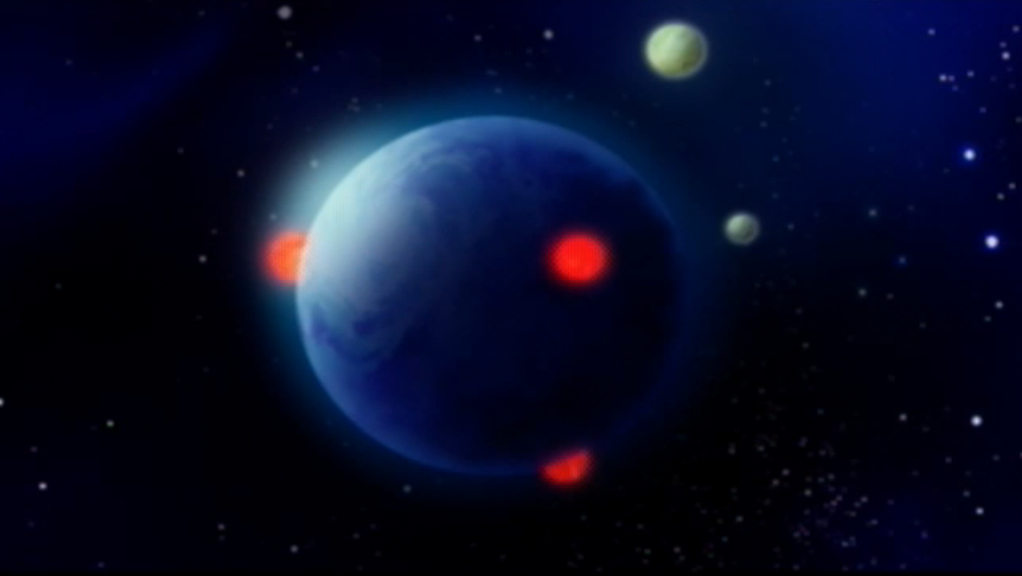 Over the next few years, the Saiyans began rebuilding and constructing their empire. King Kai explained that there was a problem however, with the Tuffles gone, they had no one to battle but each other, so they built a spaceship and visited a nearby planet called Arcose, home of the Arcosian race. The Arcosians had great wealth and technology, and were apparently members of the Galactic Frieza Army.

However, their planet was not suitable, so they hired a group of Saiyans to attack and take over a new one for them in exchange for money and technology. Not too long after, they met the galactic dictator Frieza, who then annexed the planet and forcefully drafted all Saiyans into his army. After seeing the Saiyans will to fight and their great power, he made them his official pirates, and had them take over entire planets so that they could be sold to the highest bidder. This continued for many years until Frieza began to grow wary of the Saiyans' ever growing power, and feared that one day a Saiyan would arise that would be strong enough to challenge him. So in Age 737 after being ordered by Beerus himself, with one devastating attack, Frieza blew up Planet Vegeta, taking almost all of the Saiyan race with it, with the exception of a very select few (only Goku, Raditz, Vegeta, and Nappa in the manga).

Though the Tuffles were rendered extinct in approximately Age 730, traces of their race managed to survive, most notably the Dr. Raichi, who appeared in Dragon Ball: Plan to Eradicate the Super Saiyans, and technically died on the same fateful night as the rest of the race. However, he was resurrected as a Ghost Warrior by his own creation, Hatchiyack, a machine designed to amplify the "power of hate" in order to help the Tuffles fight back and defeat the Saiyan menace. Both of these creatures are successfully destroyed by the collective might of the remaining Saiyans, Goku and Vegeta, and their descendants.

The only other survivor was the Tuffle experiment Baby, a genetic experiment combined with the genes of the current Tuffle King, who takes his revenge in Dragon Ball GT. Though Baby himself is not an actual Tuffle, he possesses their genetic information (notably that of the last Tuffle king as mentioned above), making him a DNA archive for the race. In Age 789, Baby manages to find the remaining Saiyans after encountering Goku, Trunks, and Pan in space, and later proved to be a powerful foe, mind-controlling the people of Earth and recreating Planet Plant which was destroyed by Frieza while under Saiyan control. However, Super Saiyan 4 Goku finally destroyed Baby by blasting him into the Sun from the reborn Planet Plant with his 10x Kamehameha.