It involves the user charging a small ball of Ki in his/her hand, and firing it off in a fashion similar somewhat like Goku's Angry Kamehameha, Vegeta's Final Galick Cannon, or any other one-handed energy wave attack. The beam itself is not very strong, but it can be used either to start a combo against the user's opponent, or simply to knock them away so that the user can charge for a Blast 2 or Ultimate Blast attack.

In Dragon Ball Z: Bardock - The Father of Goku, Bardock uses the Rush Ki Wave against Frieza Soldiers while flying towards Frieza's Spaceship.

Shula uses the technique against Goku.[1]

Vegeta uses it against Gohan.[2]

Rush Ki Wave was named in Dragon Ball Z: Budokai Tenkaichi 3. Many characters in the game can use the Rush Ki Wave, and the color of the attack varies with the user. 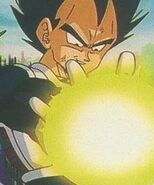 Retrieved from "https://dragonball.fandom.com/wiki/Rush_Ki_Wave?oldid=1937553"
Community content is available under CC-BY-SA unless otherwise noted.