Rising Dragon (, Hyōga Shaoron) is the brother of the martial arts master Sky Dragon. He is enemies with the Chin-Star School, but he eventually becomes friends with Goku and the school after Goku defeats his brother in a martial arts tournament. He only appears in the Dragon Ball episode "Goku vs. Sky Dragon".

He wears a blue shirt and navy blue pants. He appears to be bigger but weaker than his brother.

He tends to start fights and is incredibly rough.

Rising accused Chin Taiken's son, Shoken, to have stolen his wallet. Master Chin is forced to defend himself and his son. Master Chin leaps into the air and performs his trademark move, the "Phantom-Star" technique, but starts coughing, which Rising Dragon takes advantage of and starts beating Chin. Then Sky Dragon shows up and so to speak slaps him and apologizes for his brother's rude and scornful behavior. 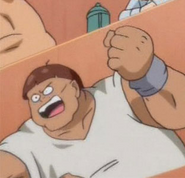