Reality Machine is a giant, Anthropomorphic rice cooker that generated things off of pictures that are placed into it. It was invented by Senbei Norimaki, and brought Goku and Kid Buu to the Dr. Slump universe.

Senbei was originally going to use the Reality Machine to generate a woman out of a Dirty Magazine, but while he was interrupted by the phone ringing, Arale and Akane Kimidori put a picture of space and the manga page the scene was taking place on in it instead, causing trouble for Senbei.

The Reality Machine later makes an appearance on the cover of the chapter "Affairs of the Heart!".

It is revealed that Senbei created a new edition of the Reality Machine, which he named the "Reality Machine #2", and it is the invention that made him win the award for the best world invention, and the ceremony was held in West City. Senbei demonstrated the invention by using his imagination to create a girly magazine, and Mr. Satan uses it to create an action figure resembling himself.

Later on while Goku was battling Arale, the Reality Machine #2 was used to conjure Poop-Boy so they could buy time as Arale was entertaining herself poking it. It was then used by everyone in the world watching the conference on their TVs (Bulma used the news video camera to put a picture of it on everyone's screens) to create a single ball of the most delicious foods everyone could imagine, and it was fed to Beerus to convince him to help the group with the playfully rampaging Arale.

In the Dr. Slump remake, Arale puts the last volume of the Dragon Ball manga, "Goodbye, Dragon World", in the Reality Machine, and a black and white version of Goku and Kid Buu fighting each other comes out of it. 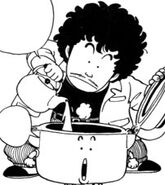 Senbei uses the Reality Machine
Add a photo to this gallery

Retrieved from "https://dragonball.fandom.com/wiki/Reality_Machine?oldid=1787439"
Community content is available under CC-BY-SA unless otherwise noted.