Rampaging (暴走, Bōsō; Out of Control)[1] is a transformation where the user goes berserk and powers up.

The artificial hybrid Demon Earthling Mira is part Saiyan, and thus through the power of anger is capable of undergoing the Out of Control transformation prior to taking on his own Super Saiyan form.

After being turned into Meta-Cooler by Fu, Cooler gained a Rampaging Meta-Cooler form. In this state he could further transform into Golden Meta-Cooler.

This form was named in Dragon Ball Heroes. In a mission for UVM12, the Meta-Cooler Corps. appeared upgraded in the same way as Cooler during the Universal Conflict Saga. 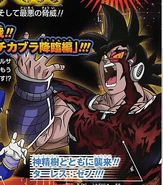 Xeno Turles in the Rampaging form 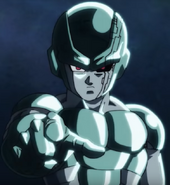 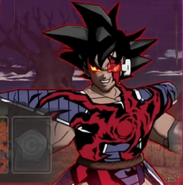 Rampaging Xeno Turles on the Story Menu screen for "Side Story: Note's Adventure" in World Mission
Add a photo to this gallery

Retrieved from "https://dragonball.fandom.com/wiki/Rampaging?oldid=1916412"
Community content is available under CC-BY-SA unless otherwise noted.