Pybara (ピバラ, Pibara) is the Yardrat elder, and the one who taught Goku the Instant Transmission.

Compared to other Yardrats, Pybara is noticeably several times larger in both height and width. Unlike the others of his kind, Pybara also has two whiskers along with two pointed tips at the top of his head as opposed to the one like the other Yardrats.

Pybara is a very composed if not carefree individual. As the wisest of his people, Pybara is well-versed in all of Yadratian culture and applications of Spirit Control. Very kind and respectful, he is more than willing to teach guests to his world how to use Spirit Control. At the same time, he is not without a humorous side, using his Spirit Control to deceive his guests for a simple joke at their expectations. He is also apparently very alert to the events arounds both both around him and from afar, having already known about Moro's actions and Vegeta's reason to see him.

Pybara trained Goku after discovering he alongside Vegeta defeated the Ginyu Force who plan to committing horrors on Planet Yardrat before Frieza dispatched them to help him on the Battle on Planet Namek in December of Age 762. As the elder, Pybara is guarded by two Yardrat of the first type introduced.

Main article: Galactic Patrol Prisoner Saga He meets Vegeta in Age 780 and agrees to help him with training to overcome the Energy Drain technique used by Moro in the conflict against him and his army, the Galactic Patrol Prisoners. He tells Vegeta of their studies of Spirit Control, a way to shift, split and grow their own spirit. While teaching Vegeta, he tells him that his spirit is much more unstable than Goku's was, with Goku having taken only 150 days to complete that stage of training.

Some time later, Vegeta has continued to progress at a rapid pace, with Pybara telling him that his spirit is now more polished than Goku's. Telling Vegeta that he will now begin teaching him their abilities, Pybara heals Vegeta of his injuries, though tells him it is not a technique he can pull out yet due to it being too advanced. And thus, Vegeta must start with the basics; Instant Transmission.

When Irico informs Vegeta of the arrival of a few of Saganbo's men, Pybara cautions Vegeta on being careful with how he wields his newfound power. Vegeta is initially unsure of what he means until he fires an unexpectedly powerful Galick Beam. Pybara teleports to the battlefield and tells Vegeta that it was due to his own nascent power, having now become much more powerful than he was before. After Vegeta defeats Yuzun, he asks Pybara to be taught a technique that can take down Moro and he agrees despite the protests of the other Yardrats.

Two months later, Pybara continues to train Vegeta. He feels the disturbance in the Earths spirit after the Galactic Bandit Brigade appear and confront the Dragon Team, but Vegeta refuses to go until he has mastered his new technique.

At some point during the battle between Goku and Moro, Vegeta finally masters the technique. Pybara commends him on learning it so quickly but is unable to teleport Vegeta to Earth when asked due to it being forbidden for Yardrats to use teleportation to travel off world. Nevertheless when understanding the urgency of the situation, Pybara offers to break the rule just once to teleport Vegeta to Earth but he refuses, saying that he can manage it himself. Vegeta thanks Pybara for training him and heads off, with Pybara calling Vegeta a prodigy born of hard work. 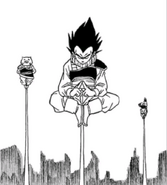 Vegeta learning Yardratian techniques
Add a photo to this gallery

Retrieved from "https://dragonball.fandom.com/wiki/Pybara?oldid=1921726"
Community content is available under CC-BY-SA unless otherwise noted.