Dragon Ball Wiki
Register
Don't have an account?
Sign In
Advertisement
in: Planets, Places in the Seventh Universe, Destroyed Planets

Prisoners from across time and space

The Prison Planet[1] (監獄惑星, Kangoku Wakusei) is a set of seven planets chained together and used as a prison by Fu.

Most notably, one of the planets in the collection resembles the real-world Earth.

Above and behind it are two planets that resemble Jupiter, with the one near the Earth lookalike's western hemisphere being inverted upside-down. Another resembles Saturn, along with a greenish planet that is mechanized (much like the planets of Universe 3). One of the planets that makes up the Prison Planet is Babari from Universe 10,[2] here referred to as Green Area. Future Trunks was initially imprisoned on the Slum Area[3] planet of the Prison Planet. The nucleus of the Prison Planet is the Core Area, where several powerful warriors were contained.[4] It is an extremely volcanic planet that resembles a red dwarf star.[5]

King Cold's forces are locked in combat with Hatchiyack's ghosts in the Chaotic region of Hell, referred to as the Chaos Area.

The planets are tied together by massive chains, with a keyhole being present at the center.

The planet contains its own new set of Dragon Balls, simply referred to as "Special Dragon Balls" by Fu, which are needed to leave the planet.

The Prison Planet was created by Fu in the second version of the future timeline where Future Trunks lives after the "Future" Trunks Saga[6] as an experimental site[7] and also as a prison, numerous warriors from across time and space were imprisoned here as part of Fu's experiment.

In the game and anime, following the end of the battle between Perfected Ultra Instinct Goku and Super Saiyan 3 Cumber, the planet exploded, in the manga the planets were separated by Oolong's wish and returned to where they came from. 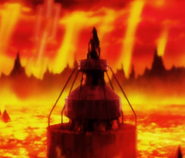