Power Ball (パワーボール, Pawā Bōru)[6] is an Energy Sphere used by Saiyans to mimic the presence of a full moon.

By combining ki with the planet's atmosphere, a sphere of condensed Blutz Waves is created. Using this, a Saiyan can achieve the Great Ape transformation even when a full moon (or similar planetary body) is not present. However, using the technique is apparently very tiring, so it is primarily used as a last resort, and even Saiyans that can use it prefer to transform using a planetary body (Vegeta mentioned to Goku that he planned his trip to Earth to coincide with the full moon in an attempt to avoid using the technique). The Power Ball disappears after 90 minutes.[7]

A Power Ball was first used by Vegeta during his battle against Goku. This same Power Ball would later be used against Vegeta when Goku tells Gohan to look at it to transform.

The technique is seen again during flashback in the anime series. It takes place while Dodoria's explanation of Freeza's use of the Saiyans. An unnamed Saiyan warrior is seen performing the technique so that he and his comrades can transform into Great Apes.

In Super Dragon Ball Heroes, Cunber used this technique to transform into a Golden Great Ape against Vegito.

In Dragon Ball Z: The Tree of Might, Turles performs this technique to make Gohan transform into a Great Ape and attack Goku, and destroys it afterwards to prevent himself from transforming. Thanks to Icarus, Gohan apparently gets control over his Great Ape form and attacks Turles. Turles then tried to attack Gohan, but Goku managed to cut off Gohan's tail in time and save him from Turles' Kill Driver.

In Dragon Ball Z: Budokai, Vegeta launches the Power Ball in one of the cutscenes, and it is colored yellow.

In the Budokai Tenkaichi series, Vegeta, Turles, and King Vegeta can use the Power Ball to transform into a Great Ape at any time, while other Saiyans with tails must be on a stage with a full moon in order to transform (Raditz, Nappa, Bardock, Fasha, and Kid Goku). Bardock is amongst those that require a full moon, which further goes against the Ocean dub stating he invented the technique.

Vegeta uses the Power Ball in Dragon Ball Xenoverse for the same purpose he does in the original series; to transform into a Great Ape. This only appears in a cutscene, and the playable Vegeta is incapable of using it in the game-play proper. The Power Ball is mentioned one final time in the Legendary Super Saiyan Saga when Bardock asks Vegeta to make the Ball for him to use to become a Great Ape for the purpose of combatting Broly. Bardock destroys the Power Ball immediately after he uses it, to prevent Broly from potentially transforming into a Great Ape as well.

In Super Dragon Ball Heroes: World Mission, Chapter 2, Sub Chapter 1: "An Anomaly?! The Saiyans Strike!", Beat and Note fear Vegeta plans to use the Power Ball to go Great Ape after Goku and the Z Warriors show up, only to be surprised when Vegeta goes Super Saiyan 3 instead. In the extra anomaly within the extra dimensional space of the same Sub Chapter, after Raditz and Vegeta lose their anomalous Super Saiyan 3 forms due to losing energy from the toll of the form on their bodies, Vegeta resorts to his trump card, the Power Ball. In World Mission, the Power Ball Vegeta creates is purple in color. Beat tries to warn Goku to stop Vegeta before he throws the Power Ball, but Vegeta successfully throws it shouting "Let there be light!" and it turns blue-white like most depictions. However only Raditz transforms at first, causing Goku to realize his own Great Ape form was responsible for Grandpa Gohan's death after seeing his brother's transformation. Vegeta transforms mid-battle during Round 2 (R2) unless his team is defeated during Round 1 (R1). Additionally, certain characters create a Power Ball to transform into Great Apes and Golden Great Apes (or due to game mechanics other Giant Forms such as Great Namekian, Giant Bio-Broly, Metal Cooler Core, Giant Demon God, Cell X, and Hirudegarn) which requires the player to draw a circle as the transformation's card action.[3]

A Saiyan creates a Power Ball

The Saiyan launches the Power Ball 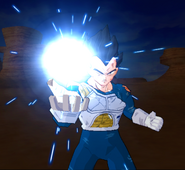 Vegeta uses a Power Ball in Battle of Z

Retrieved from "https://dragonball.fandom.com/wiki/Power_Ball?oldid=1916700"
Community content is available under CC-BY-SA unless otherwise noted.