Power Abduction[1] is a special ability used by Syn Shenron.

Syn draws the Dragon Balls into his mouth, swallowing them to assume his Super Shadow Dragon form Omega Shenron. In this state, he attains the combined abilities of the other six Shadow Dragons, as well becoming ten times more powerful.[2][3]

In the Dragon Ball Xenoverse series, Omega Shenron form is enhanced by Dark Magic. While using this power up his eyes glow red, and he gains a purple and black aura.

The second is the Supervillain state which in which his eyes glow pink and gives his body a pale metallic coloration, along with a glowing Time Breaker symbol on his forehead. He also gains a dark black and white aura.

Power Abduction appears in most video games that Syn appears in, as his transformation method. 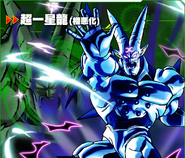