The Reborn Piccolo vs No. 17

Waiting in the Wings
"Piccolo vs. Android 17" (ピッコロ１７, Shinsei Pikkoro Tai Jūnana-Gō, lit. "The Reborn Piccolo vs No. 17") is the one hundred seventy third chapter of Dragon Ball Z and the three hundred sixty-seventh overall chapter of the Dragon Ball manga.

The cover of the chapter features information about the Red Ribbon Androids.

The Androids arrive at Kame House looking for Goku, but find Piccolo who decides to challenge them. The Androids accept the challenge and travel to some nearby islands to stage their battle. Piccolo, now fused with Kami, is confident in his strength and decides to fight the Androids one at a time to destroy them so Cell cannot be complete. Android 16 notes that there has been a strange change in Piccolo. Piccolo attacks Android 17 first and the battle begins. As the battle rages the two fight on a near equal level. Android 17 is confused as he notes that Piccolo is now stronger then Goku according to his Database. Nonetheless, Android 17 concludes that Piccolo will eventually get tired and lose. Impatient, Android 18 says she can beat Piccolo and offers to tag in, but Android 17 declines the offer.

To Piccolo's horror Cell shows up to join the battle. The Androids do not know who Cell is and tell him to leave. Cell charges up scaring Piccolo (17 and 18 cannot sense power levels). Piccolo wonders how many thousands of people he had to absorb to gain that much ki since their last encounter. Cell starts his attack on Android 17 to absorb him. Piccolo tries to help Android 17, but both are over powered by Cell. Piccolo is blasted by Cell and thought to be killed. Cell then starts attacking Android 17 again, of whom tries to fight to no avail. Android 18 questions why 17 is losing since he is supposed to be the ultimate Android. To her surprise, Android 16 reveals that he is in fact the superior model and stronger than Cell in his imperfect form. Android 16 than goes to rescue Android 17 and battle Cell.

Translation of the cover image

Hellzone Grenade blasts close in and land on Android 17 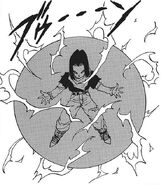