This state only exists in the Dragon Ball Super manga. It is noted to be a higher transformation than Super Saiyan Blue.

There are no physical changes between this state and a regular Super Saiyan Blue form other than the absence of their aura while in the perfected state. The form only possess an aura when it's user is performing Dragon Dash.[3]

Similar to a regular, unrefined Super Saiyan, a Super Saiyan Blue possesses inherently poor stamina. Because of this, a Super Saiyan Blue would usually be able to maintain peak levels of ability for only the brief period following their initial transformation before exhaustion sets in and performance begin to plummet rapidly. Goku addressed this issue by thoroughly training and improving his Super Saiyan Blue form to build up his endurance. As a result of this training, he developed the technique of containing and harnessing his radiating aura inside his body through intense, continuous concentration and uses it to bolster his power. With this method, Goku had achieved mastery over the form, allowing him to realize the full potential of Super Saiyan Blue. In essence, this is a state where the Super Saiyan Blue operates at maximum power indefinitely, making it vastly superior to the basic Super Saiyan Blue.

In many aspects, this state is similar to a Super Saiyan Full Power in regards to the fact that they are refined versions of a normal form. However, similar to the Super Full Power Saiyan 4 state, a Completed Super Saiyan Blue requires time and focus to achieve. There is even more skill involved in maintaining this state, as the Saiyan must be capable of prolonged periods of intense mental and physical concentration in order to continuously contain the influx of ki within their body. Inability to do so results in an immediate eruption of ki in even the smallest areas, followed by equally immediate and acute pain. As indicated by Vegeta, this state is a high-risk, high-rewards technique as a Saiyan risk crippling their body if their ki erupts completely.

As stated before, this state is incredibly powerful. In this state, Goku was powerful enough to challenge Fused Zamasu by himself. Concentrating all of his available power to his hand, Goku was able to perform Hakai. Though not nearly as effective as Beerus', this feat still demonstrates the potential of a Perfected Super Saiyan Blue.

Vegeta eventually achieves this state soon after, prior to the Tournament of Power Saga. Beerus notes that Vegeta has grown much stronger and decides to challenge him after the Oracle Fish says that one day Goku and Vegeta will rival him. After Beerus easily knocks around Super Saiyan Blue Vegeta, Vegeta reveals that he, too, can use this form, closing the gap between him and Goku once more. Vegeta is able to land a successful blow on Beerus; however, this infuriates the god, who gets serious and defeats the Saiyan in a single blow. Despite this, Beerus passively acknowledges Vegeta's strength and remarks that he's strong enough to be a candidate for God of Destruction in another universe.

Goku later uses this against Top when the latter challenged him. This form proved to be a great match against Toppo's Aura of a God form. However, once Toppo got serious, he easily knocked Goku down, though it should be noted that Goku greatly underestimated him.

In the Tournament of Power, Goku later uses this form again to fight Jiren alongside Hit. It is stated specifically by Whis that Goku is using this form, which is the same statement in the anime that refers to Super Saiyan Blue Kaio-ken. Vegeta uses the form against Top (who utilizes his Aura of a God), with the two proving evenly matched. Goku uses the state to battle the non-Power Stressed Legendary Super Saiyan Kale - who breaks his guard as her power rises. Goku then continues to use this form in battle with Jiren, going as far as to use it's Power Stressed state in an attempt to break his limit.

During the events of Galactic Patrol Prisoner Saga, on Namek Moro successfully wishes back his full power and magic from Porunga and despite gaining much of his power back by absorbing a large portion of energy from Namekians and also from Goku and Vegeta from their first battle. Vegeta is still confident that either him or Goku in Perfected Blue alone would be enough to defeat Moro if somehow Moro is rendered unable to use his magic.

During the battle on Earth, Goku decides to save stamina for Ultra Instinct Sign form and instead uses Perfected Blue to fight against Saganbo who has greatly been empowered since last time thanks to the continuous energy boosts he recieved from Moro and has just crushed the combined front of Gohan, Piccolo, Android 17, Android 18 and Jaco. Goku proceeds to easily overpower Saganbo, showing a sign of a big power gap. In an attempt to win Saganbo then recieves two more energy boosts from Moro which forces Goku to fight him more seriously and is still able to defeat him without taking a single scratch. On Saganbo's request of more energy from Moro, Goku gets agitated and attempts to punch Moro by teleporting behind him but it is easily blocked by Moro.

Later, after Vegeta is defeated by the newly transformed Moro, Goku teams up with Gohan and Piccolo to go against Moro. Despite being much drained and damaged, Goku transforms once again and thanks to the combined restraints of Gohan and Piccolo on Moro, Goku uses Instant Kamehameha on Moro successfully blasting off his arm, sadly Moro recovers and drives his arm straight through right portion of Goku's chest making him all bloodied and fall unconscious.

During the Tournament of Power, Goku attempted to surpass his limit by pushing the power of Perfected Super Saiyan Blue as far as he could - producing a jagged aura - utilizing the same power-up principles as the Kaio-ken[4]. Jiren likens it to Kale's bulky Legendary Super Saiyan state.

While able to fight better against Jiren's current level of power than before, the cost is that Goku's body is severely strained from the reckless attempt to power up. Even with the power boost from this state, Goku is still no match for Jiren.

When witnessing Goku breaking his limits and getting one step ahead once more, Vegeta became enraged by this. At the same time, he came to the realization that his nature was not suited for Autonomous Ultra Instinct. Instead, drawing from the pride of knowing the vast majority of his growth all his life came from walking the path of a lone warrior with no teachers, Vegeta accessed this new refined power of Super Saiyan Blue.

In this state, the user produces an aura again that is larger yet calmer. The power of this state is noted by Jiren to have given him more trouble than anything else he had faced during the Tournament of Power aside from the "ascended state" that Goku had displayed shortly before, however Vegeta is still quickly outmatched by the Pride Trooper. 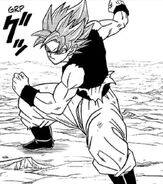