Anime: "The Gods of Every Universe in Shock?! Losers Erased in the Tournament of Power"
Manga: "The Gods of Destruction From All 12 Universes"

Sacred World of the Kai

Pell (ペル, Peru) is the Supreme Kai of Universe 2[1] and appears in Dragon Ball Super during the Universe Survival Saga.

He is described as looking like an upgraded version of South Supreme Kai.

He is very confident in his universe's might, believing it to be the strongest of them all. Like Rumsshi from Universe 10, he relies too much on brute strength and can get confrontational to anyone who challenges his views. Also, he seems to be somewhat lecherous like Old Kai as shown from his excitement at watching some of his Universe 2 female warriors transform. Pell is shown to be very kind with the way he reacted when he thought Frieza had killed Jimeze and then cared for him on the bench.

Main article: Universe Survival Saga Alongside Heles and Sour, Pell attends the Zen Exhibition Match. During the 40 hour preparation for the Tournament of Power, Pell was called to the Supreme Kai meeting by Khai, and got into an argument with Ea, about whether strength or intelligence is the key to winning the Tournament. During the Tournament he gets excited when the Kamikaze Fireballs transform, and is shocked when the transformation is interrupted. When Rozie is about to be knocked out, Pell calms down Heles by saying that with maidens come knights, referring to Jimeze, who saves Rozie and Ribrianne moments later with his Instant Transmission. Pell later cheered on Ribrianne during her battle with Goku, and freaked after watching Frieza torture Jimeze and thought he had killed Jimeze, but Frieza laughed that he wouldn't be so foolish, and then kicked Jimeze out of the ring. On the bench, Pell held Jimeze, who weakly apologized for failing him, but Pell calmly told him to rest.

As a Supreme Kai, Pell is much more powerful than average mortals and lower Kais. Pell works out in order to get stronger, believing that strength is the most important aspect, thus being the fittest out of the currently active Supreme Kais. His description on the Toei website notes that he is even more powerful than Universe 7's South Supreme Kai. 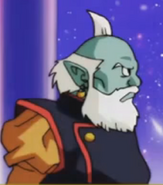 Pell caring for Jimeze
Add a photo to this gallery

Retrieved from "https://dragonball.fandom.com/wiki/Pell?oldid=1623560"
Community content is available under CC-BY-SA unless otherwise noted.