He always wears an animal hat similar to his mother Mame Soramame. Peasuke is short like Arale and maintains being the same height even when he gets older which disappoints him.

Peasuke Soramame is always criticized by Taro when he wears the hat around them because it "cramps his style." Peasuke wishes to be like Taro when he gets older. He also likes to collect the autographs of people and beings he finds interesting.

Peasuke first meets Arale on her first day of school at Penguin Village Middle School in Midori Yamabuki's class. He becomes friends with her once she breaks a tree in front of him, Taro and Akane welcoming her into their friend group.

In the manga, Peasuke is seen leaving Penguin Village High School with everybody else for their vacation. In the anime, Peasuke is shown having a drink at the coffee pot and tells Akane that he will be doing homework over the school vacation.

Ten years later in Age 759, he is married to his girlfriend Hiyoko and has a kid named Poosuke.

Peasuke along with the rest of Earth's population was killed during the Majin Buu conflict but were all later resurrected by the Namekian dragon Porunga. He died again later when Frieza destroyed the Earth in an attempt to kill the Dragon Team, but his death was undone when Whis used his Temporal Do-Over technique. It is confirmed that Peasuke lives past the age of 73 in Age 805 but doesn't get any taller.

He is seen at the Coffee Pot when Arale busts in to say hi to everyone on her way home. His appearance has reverted to his younger look even though over 30 years have passed.

In the 1997 remake of Dr. Slump, the only change to Peasuke's appearance is that his animal hat is gray instead of being white. When Goku visits Penguin Village, Peasuke tries to ride the Flying Nimbus but is rejected.

Taro Soramame, Peasuke Soramame, and Akane Kimidori make a cameo in the sixth chapter of Dragon Ball Heroes: Victory Mission, in their 1997 remake appearance. They are at Satan Mall, in the Heroes Stadium, during the Dragon Ball Heroes tournament final match between Beat and Froze.

Kengo Kora plays Peasuke in a live-action Dr. Slump themed commercial for GU clothing store. In the commercial he is standing next to Akane and Taro in front of the Coffee Pot watching Arale transform into an outfit from the store. 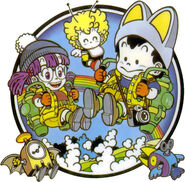