Peace to the Future

Peace for the Future...

Future Trunks is standing, glaring. In an image behind him is Future Cell, in his Imperfect Form.

Three years have passed since Future Trunks had defeated Future Android 17 and Future Android 18. Now only one last obstacle to peace for the future remains: Future Cell. Trunks knows all about Cell's plan to kill him, steal his time machine, and return to the past to absorb Androids 17 and 18, and this time, Trunks isn't going to let that happen.

Future Cell realizes that Trunks has already gone to the past, which is why he knows so much. But according to the calculations of the spy robots, Cell says that Trunks couldn't even defeat Androids 17 and 18, much less him. However, Trunks asks where the Androids are now, which is when Cell realized that Trunks destroyed them. Trunks, not wanting their fight to ruin all of West City's rebuilding, launches Cell away with a Kiai, then flies after him to an abandoned location.

Cell admits that Trunks has gotten stronger, but readies for battle anyway. Trunks transforms into his Super Saiyan form, and Cell powers up as well. As they fight, however, it's clear that Trunks has the advantage, eventually catching Cell by his tail and flings him upwards. Cell begins to charge up a Kamehameha, but then sees Trunks charging up a Heat Dome Attack, which he fires, destroying Future Cell. With Future Cell destroyed, peace is finally assured for Trunks' timeline... 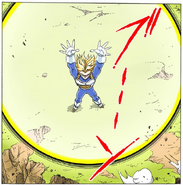 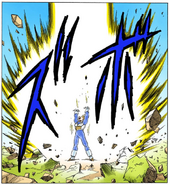 Retrieved from "https://dragonball.fandom.com/wiki/Peace_to_the_Future?oldid=1873611"
Community content is available under CC-BY-SA unless otherwise noted.