One Goal, One Enemy

One Goal, One Enemy (ウサギの耳, Usagi no Mimi) is the sixteenth chapter of the Dragon Ball manga. The chapter's anime counterpart is the first half of the episode "Boss Rabbit's Magic Touch".

The cover shows Goku, Oolong, and Bulma driving on a path through a forest of mushrooms of assorted heights.

Heading westward on their hunt for the last Dragon Ball, Goku, Bulma, and Oolong drive through a strange forest of mushrooms. None of them know where they are, and Oolong notices that they are running out of fuel. Meanwhile, Yamcha and Pu'ar tail them in their own car, still planning to steal their Dragon Balls.

The trio manage to find a village, but upon entering it they noticed that all of the citizens seem to be afraid of Bulma. Undeterred, they stop at a gas station. While the car is being filled, Bulma leaves to shop for some capsules. The gas station attendant and capsule salesman are both visibly distraught, and provide their products free of charge. By this time Yamcha and Pu'ar are in the village as well, along with two uniformed men wearing rabbit ears.

Bulma, deciding to see if her good fortune will continue, goes to a clothing store and buys a gypsy outfit to replace the bunny costume she had been wearing. The salesman is shocked to learn that Bulma is not a member of the Rabbit Mob, and angrily accuses her of playing a cruel joke. Bulma is confused, but notices that everyone has stopped staring. She returns to Goku and Oolong, where they see the two bunny-eared man harassing citizens. The two men approach Bulma, who realizes why people were staring earlier. She tells Goku to beat the two men up, and he gladly complies. As the two men lie defeated on the ground, one pulls out a walkie-talkie and calls his "master," which sends the citizens of the village into a panic.

Bulma gets a new change of clothes

Goku beats up the one of the Rabbit Mob 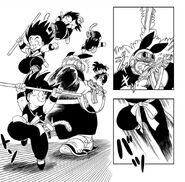 Goku uses his speed to evade the other Rabbit Mob member

Goku defeats the other Rabbit Mob member
Add a photo to this gallery
Retrieved from "https://dragonball.fandom.com/wiki/One_Goal,_One_Enemy?oldid=1259737"
Community content is available under CC-BY-SA unless otherwise noted.