Omori's Island is a small island that appears in Jaco the Galactic Patrolman and later in Dragon Ball Super. It is located just outside of East City that is full of trees and cliffs that had a laboratory that was originally used by the government to test out Omori's time-travel theories - which included constructing a time machine. The front of it has a pier and Omori's house is by the pier and the damaged laboratory is on its left coast. A smaller island exists behind it.

Omori and his wife lived there, and loved it. However, one day, Omori's assistant made an error while maintaining pressurized gases, causing an accident to occur, killing many people, including Omori's wife. The government abandoned the project, but Omori continues to live there by his wife's grave.

Jaco crashes in the ocean near the island, and propels its boat there, impressing Omori. In the night, Jaco goes around the island, and into the ocean - later killing an enormous shark that would prevent any ships from arriving/departing from the island. The next morning, Omori explains the past of the island; it was the home of a research laboratory on time-travel, until an accident occurred, killing many people. Omori continued to stay in the island, by his wife's grave. Tights later started to live here, and had parts of the island fixed up. 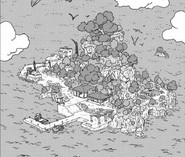 Omori's island before it was fixed up

Omori's island before it was fixed up