The Null Realm (無の界, Mu no Kai), also known as the World of Void, is an isolated place outside of the multiverse with literally no time or space and is an infinite void. The Null Realm is the setting of the Tournament of Power, as the fighters can take advantage of the void to use the full extent of their powers.

The Grand Minister dubs the Null Realm as the setting for the Tournament of Power. The Gods of Destruction, Angels, and Supreme Kais from every universe gather to spectate the matches of their fighters of their respective universes, along with the Grand Minister, Zeno, and Future Zeno. The background sky changed to a darkish-green as the tournament progressed[1][2] (in the anime the Grand Minister changed it to indicate the tournament's remaining time; 24 minutes). During the final minutes of the Tournament an energy attack causes the sky to change once more to a more typical space theme, with deep purple and blue hues with particles lighting the arena.; in the anime, Top - having reached the state of God of Destruction Mode - releases Energy of Destruction that changes the background yet again,[3] while in the manga, Goku and Vegeta's Kamehameha/Gamma Burst Flash combo against Super Full Power Jiren causes the change.[4]

In Xenoverse 2, as part of the Extra Pack 4 DLC, the Null Realm appears as part of the Tournament of Power Arena stage. The stage has a unique feature where Zeno and Future Zeno will provide commentary when the stage is selected in offline or online battle. The stage appears in one parallel quest New Parallel Quest: "The Ultimate Legendary Super Saiyan" where Kefla and Cabba are fought by Broly and the Time Patrol when they access its Gate from the Space stage. Zeno and Future Zeno's commentary is not present during the parallel quest. 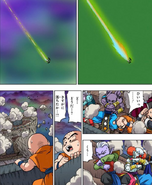 Goku and Vegeta's attack changes the color of the realm

The Null Realm with a green background

The Null Realm after undergoing Top's Energy of Destruction