First, the user charges up to the peak of their power, and surrounds their body in a sphere of energy. Then, charges at the opponent using the energy sphere as a shield, headbutting them and inflicting a massive amount of damage.

Frieza uses this attack in a Energy Clash against Super Saiyan Goku's Super Kamehameha. Though Goku is able to hinder Frieza for a few minutes, Frieza eventually disengages from Goku's blast, flies around it, and strikes the Saiyan down into the ground from the side. It is later revealed that Goku survives and continues the battle with Frieza.

In the manga, as soon as Goku returns Frieza prepares another Nova Strike; however, upon seeing Porunga appear, Frieza uses the Nova Strike to fly as fast as he can towards Porunga. After Porunga vanishes and Goku challenges Frieza to hand-to-hand combat on the ground, Frieza powers off his Nova Strike.

During the Tournament of Power, Frieza uses the Nova Strike against Jiren in the tournament's final moments. In the anime, his first Nova Strike nearly brings himself and the Pride Trooper offstage, though Jiren breaks free and redirects the Nova Strike back onstage, leading to Goku (struggling to maintain Super Saiyan) joining Frieza with a Nova Strike of his own to force Jiren offstage. In the manga, Goku does not join Frieza in his Nova Strike but is instead behind Jiren due to having previously attempted to hold him in place - resulting in his elimination too. Both versions of the tournament lead to the elimination of Frieza, Goku and Jiren, and Android 17 remains as the final competitor to win the tournament for Universe 7.

In Dragon Ball Xenoverse, it is called Death Crasher and is one of Frieza's super skills. It can also be learned by the Future Warrior by taking Frieza on as a Master and completing Frieza's first training mission. The skill is a chargeable super skill, the longer the charge the further the user travels.

In Dragon Ball Xenoverse 2, it returns under the name Death Crasher and is one of Frieza and Cooler's Super Skills. It can be obtained by the Future Warrior by completing School Quest: Lesson 1 of Frieza's Training. When fully charged it allows the user to ignore Ki Blast moves while charging forward. After the 1.09.00 Update, it can be added to Dodoria's custom skillset after purchasing it in Partner Customization.

Nova Strike appears in Dragon Ball FighterZ as one of Frieza's attacks.

In Dragon Ball Z: Kakarot, it appears under the name Death Surge as one of Frieza's Super Attacks. 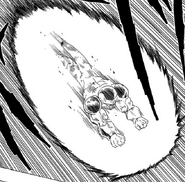 Frieza uses his Nova Strike in the manga

Retrieved from "https://dragonball.fandom.com/wiki/Nova_Strike?oldid=1943436"
Community content is available under CC-BY-SA unless otherwise noted.