Abra first appears as a small Neko Majin inside Kabra's headpiece, but during the battle with Salaga, it's revealed that he can talk and fight.

As Neko Majin V, Abra has a big V on his belly, and he wears a vest similar to that of the Fusion Dance characters.

The bonus chapter "Extra Story" explains how Abra and Kabra first met. Neko Majin V is playing with his Dragon Ball Heroes cards, in which he excels in rather than martial arts or magic when he is challenged by Usa Majin Lop to a duel. Lop reveals his cards, which are those of Neko Majin Z and Neko Majin Mike. V wants them badly enough to trade his own Majin-Dama for them, so Lop offers to do exactly that. V complies, handing over his Majin-Dama orb, only after which Usa Majin mentions that the cards come with the 2014 Saikyō Jump #7. Indignant, V challenges Lop to a Dragon Ball Heroes battle in order to win back his Majin-Dama. By using his own Neko Majin Mix card, along with transporting in Goku, he is able to defeat Lop with a combined Kamehameha/Nekohameha. V demands his Majin-Dama orb back, but Lop realizes he left it in the outside world. Outside, several boys are playing with a soccer ball, while Kabra sits by himself playing his 3DS. The ball is accidentally kicked towards Kabra, knocking his game out of his hands. Annoyed, he kicks the ball away instead, earning the ire of the other kids. Walking over to the Dragon Ball Heroes machine sitting out in the middle of nowhere, he finds a marble-like item sitting on it and, thinking it is a superball, he throws it at a nearby rock formation, only for it to shatter. Just then, V appears outside the machine, saying that he now has to haunt Kabra. The narration explains that this is how the adventure of Kabra and Neko Majin V began, as Usa Majin Lop, cradling his head, decides to go home.

Kabra and Abra arrive at a desolate battlefield, scarred as though it has already seen a great battle. As Kabra wonders to himself where he is, the Majin Berserker appears and tells him it is the Sacred World of the Kai of long ago. The Majin Berserker introduces himself as Salaga and says that he must be Nobra. Kabra angrily corrects him. Salaga asks him if he likes the place, but Kabra just wants to know why it is so beat-up if it is really the Sacred World of the Kais. Salaga is surprised he, a Majin user, does not know: this was the place where, long ago, the Supreme Kais fought with Kid Buu and lost. In other words, it is like the place where Majin began; the perfect Age for two Majin avatars to fight it out. Kabra has no interest in fighting since this is not really the time with everything that is going on. Abra recommends that Salaga go home, but he has no intention of doing so. As Abra chastises Kabra for slipping into an "I-want-to-go-home" rant, Salaga brings out his cards: Kid Buu, Piccolo, and two incarnations of Super Buu (base and Gohan absorbed). His headpiece then breaks to reveal the cracked Three-Star Dragon Ball, as it dawns on both Abra and Kabra that he is evil. Abra's banter from inside Kabra's headpiece has not escaped Salaga's notice, and he correctly identifies the cat as a Neko Majin. Abra retreats inside, as Salaga laughs maniacally.

Salaga then begins battling against Kabra by knocking him down with a heavy punch and scares him by licking Abra. Salaga wonders whether the Neko Majin is just for decoration, and Kabra tells him hands off. Salaga is disappointed: Neko Majin is supposed to be considered strong, but this one does not seem to be of any use. He then decides to aim the Neko Majin Abra and clicks his fingers to have Super Buu (who has now absorbed Piccolo) to attack. Super Buu (with Piccolo absorbed) uses the Mystic Attack to smash Kabra into the ground and steal Abra and then throws Abra at high speed towards a rock outcropping. Before Abra can hit the rock, Kabra blasts off anger in his eyes, grabbing Abra in his arms and careening into the rocks himself saves him, taking on a new suit of armor in the process. Salaga begins laughing and wonders what was up with him going out of his way to save a single Neko Majin. As the dust clears, Kabra says that there has been nothing good since they met: Abra is a loudmouth and talks out of turn, and Kabra liked being by himself, to begin with. He does not need friends. Being disliked suited him, but he has changed since he met Abra. Salaga taunts him, saying he is not listening to this trip down memory lane. Kabra says that Abra has changed him, and that is why he will beat down anybody who hurts Abra. Abra perks up. He asks Kabra if that means that he saved him. Kabra agrees and asks if he is all right. Abra is ecstatic, this marks his thousandth good deed, the curse is lifted. Abra lifts into the air and, in a puff of smoke, he transforms into a larger form: Neko Majin V, shocking Salaga. It is time for his pet to enter the battle against Salaga and his team.

V's true form as a Neko Majin, he loses this form for a period but eventually regains it.

In this form he is known as Abra. He takes on this state after his Majin Ball is broken and breaks free of it after 1,000 good deeds. 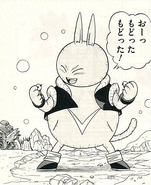 Neko Majin V
Add a photo to this gallery
Retrieved from "https://dragonball.fandom.com/wiki/Neko_Majin_V?oldid=1841796"
Community content is available under CC-BY-SA unless otherwise noted.