Naraku (那拉克, Naraku) is the leader of the Dark Namekians, and a villain in Dragon Ball Online. He is referred to as "The Black Namekian".

Naraku is one of the Namekians born on Earth after they relocated to Earth following the destruction of New Namek in Age 851. Due to King Piccolo's influence in part of the Namekians' area of the planet, Naraku was born as a Namek of pure evil from the "Evil Egg", which was created by the evil in the Namekians' hearts. The egg was first discovered in Age 940 and placed under a strong seal for safekeeping. In Age 972, Naraku hatches from the Evil Egg and he gains many followers forming a new group of evil Namekians called the Dark Namekians which results in a civil war, between Dark Namekians and the rest of the Namekian population who oppose their evil ways. Naraku lead the group with the aid of several Dark Namekian Elders who served as Naraku's advisors. Additionally his right hand man and general was the Mutant Dark Namekian Gamelan. Despite Mira and the Time Breakers role in the destruction of New Namek in Age 851, Naraku and Evil Namekians joined forces with the Time Breakers with Naraku's elder Vic joining the Time Breakers.

In Age 1000, Earth is divided into pieces among the various villainous groups each with their own goals in mind including Naraku and the Dark Namekians. Piccolo who had been keeping an eye on the Dark Namekians activities calls in the Time Patrol to deal with them as he himself had long ago abandoned the evil ways of his previous incarnation King Piccolo and sought to ensure that there would never be another Namekian Demon King to terrorize the Earth like King Piccolo had during the King Piccolo wars.

He was eventually defeated by the Time Patrol in Age 1000, at the conclusion of the battle Naraka bows before Vic before suddenly being killed by him, who then takes his place in fighting the Time Patrol but was defeated as well, thus Naraku and the Dark Namekians plans to conquer Earth failed and Naraku was ironically murdered by his Time Breaker elder whom he apparently respected and never suspected would betray him, though Vic's true loyalty was to the Time Breakers.

As a leader of the Dark Namekians, he is very powerful. When fought by the Time Patrol, he is capable of fighting against the likes of Pure Majins (who are presumably as powerful as Kid Buu). 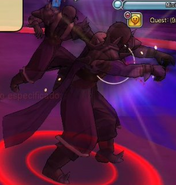 Naraku alongside a clone
Add a photo to this gallery

Retrieved from "https://dragonball.fandom.com/wiki/Naraku?oldid=1809771"
Community content is available under CC-BY-SA unless otherwise noted.