"The Galactic Patrolman Goes to Earth"

The Monster Shark is a shark which plagues the waters around Omori's Island.

The monster shark has a monstrous appearance, its a large shark with several spikes and spines protruding from its head towards its dorsal region.

The monster shark has been plaguing Omori's island for a while and prevent him or any ship from leaving or traveling to the island. Though while out for a nightly stroll Jaco had encountered the beast and was able to overcome the monster. After defeating the monster shark, it rose the surface showing its dead. The creatures death allowed Omori to be able to leave the island and take Jaco to East City for supplies.

As a massive shark almost the size of Omori's island, the Monster Shark is likely one of the most dangerous creatures on Earth at the time of Jaco the Galactic Patrolman, however Jaco manages to dispatch it in one hit. 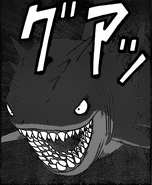 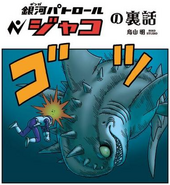 Add a photo to this gallery
Retrieved from "https://dragonball.fandom.com/wiki/Monster_Shark?oldid=1809281"
Community content is available under CC-BY-SA unless otherwise noted.