Manga: "At Sixes and Sevens"
Anime: "The Kamehameha Wave"

Mimicry refers to the coveted ability to copy another fighter's technique after seeing it used only once.

It is first used by Goku when seeing Master Roshi perform a Kamehameha to extinguish Fire Mountain in Dragon Ball. Goku later uses it at the 21st World Martial Arts Tournament, picking up Master Roshi's Afterimage and Drunken Boxing techniques, but modifying them to suit his own purposes. It is also used by Tien Shinhan during his quarter-final match with Yamcha during the 22nd World Martial Arts Tournament: Yamcha fires a powerful Kamehameha at Tien only to have it nullified and reflected by Tien's Kiai blast. Tien then later surprises everyone by firing his own Kamehameha at Jackie Chun during their semi-final match. During the final match, Goku develops King Chappa's Hasshu-ken technique in retaliation against Tien's Four Witches Technique.

In the Vegeta Saga, Chiaotzu is also shown to be able to use the Mimicry ability: after witnessing what the Saibaman's Self Destruction technique did to Yamcha earlier in the battle, Chiaotzu decides to copy it himself and later uses his version of the technique (named Farewell, Mr. Tien) against Nappa, to no avail, however. Vegeta copies Krillin's Destructo Disc, using it to cut off Gohan's tail while the latter is in Great Ape form. Vegeta also managed to learn Ki Sense after his fight against the Dragon Team.

In his 100% Power form, Frieza uses a variation of Krillin's Destructo Disk technique called the Death Saucer in an attempt to kill Goku. He witnessed the technique while in his second form when Krillin cut off his tail. Frieza also uses it in Dragon Ball GT, where Goku says he "stole it from Krillin".

Both Majin Buu and Kid Buu are able to copy the Super Kamehameha after only seeing it used once though it results in the development of the Majin Kamehameha. According to Goku, Majin Buu also copied Vegeta's Continuous Energy Bullet. Kid Buu also copies Kibito Kai's Kai Kai after seeing it only once.

Gotenks' Bam Bam technique is to copy another person's technique. It is used to copy Mr. Satan's Dynamite Kick on Super Buu. As a Super Saiyan 3, Gotenks mimics Super Buu's Vice Shout in order to rip dimensions so that he and Piccolo can escape the Hyperbolic Time Chamber.

In the anime, Goku Black is shown to be able to use this ability, but unlike other users, Goku Black's ability to use mimicry advances his power and gives him better access to his power, as he himself noted when he copied Goku's stance and attacks, he became more powerful every time he did so. He appears to be the only one who uniquely become more powerful with this ability as he continues to use it.

While watching the Tournament of Power, Zeno and Future Zeno copied Roasie's Yacchaina Fist to utilize the attack on each other when playing.

Seven-Three possess the ability to copy all of the powers and abilities of another entity for half an hour by touching the back of their neck and utilize them to the same extent as their source of origin. This allows him to match his opponent blow for blow - giving him an advantage over most foes thanks to his infinite stamina. He can store up to three entities' powers at a time. He is also able to deactivate and swap between them to conserve time. Additionally, he is able to create a complete back-up of someone's abilities and raw power, as he did for Moro at the peak of his strength.

After absorbing Seven-Three, Moro gains the ability to copy all of the powers of another entity by touching the back of their neck. However, the ability requires the orbs on his body to work, and if they are shattered, this ability will be nullified, preventing Moro from acquiring any new abilities, with Merus also sealing the ability off. Moro regained one of his orbs from a hand that was cut off however. Moro also has no time limit on the abilities that Seven-Three copied from Piccolo, Gohan and Moro himself.

In Dragon Ball Z: The Tree of Might, Chiaotzu uses a Masenko-like technique.

In Dragon Ball Z: Fusion Reborn, Janemba uses his own version of this move by creating a clone of Goku in his hand to nullify Goku's Kamehameha.

In Dragon Ball: The Return of Son Goku and Friends!, Gotenks copied Yamcha's Wolf Fang Fist and Tien's Volleyball Fist to use on Aka.

In Dream 9 Toriko & One Piece & Dragon Ball Z Super Collaboration Special, in his Fifth Form: Super Big Tuna, Akami has the ability to mimic attacks. The monster uses this to copy all of the attacks that Goku, Luffy, and Toriko had used against it while it was in its previous form.

Majin Ozotto, the final boss of Dragon Ball Z: V.R.V.S., has the power to shapeshift into the Dragon Team in the game and use their techniques. Mimicry is Majin Buu's special ability in Dragon Ball: Zenkai Battle: after seeing an opponent's long-distance energy attack, he can use "Kamehameha" to replicate it, and after seeing a close-range physical technique, he can replicate it using "Buu Rush".

In Dragon Ball Heroes, Legendary Super Saiyan 3 Broly's ultimate attack, Gigantic Omega, bore a strong resemblance to the Kamehameha, with it being implied via his bio revealing that he attained the form after surviving and getting Saiyan Power from the events of Dragon Ball Z: Broly - Second Coming that he developed the move by copying the Family Kamehameha specifically as a response to his earlier defeat.

In Dragon Ball Online, it is revealed that the Majin learned how to use the Kaio-ken technique via mimicry after King Kai taught the technique to the Earthlings and Namekians living on Earth.

In Dragon Ball Xenoverse, the Future Warrior's ability to learn other fighter's skills is explained in-game as Mimicry.

In Dragon Ball Fusions, Mimicry appears as a Special Move that allows users to copy and use one of their opponent's Special Moves regardless of its nature (for example they can even mimic weapon-based techniques or techniques that would normally require cybernetic modifications). Additionally, during the main story, Nappa and Raditz use mimicry to learn the Fusion Dance after witnessing it being performed by Goten and Trunks.

In Dragon Ball Z: Kakarot, it is referred to as Imitation in the story notes for "Cell Saga Episode 5" which reveal that in addition to Goku, Krillin also learned Tien's Solar Flare technique via imitation (Krillin was present during the 22nd World Tournament when it was first used by Tien against Goku and during the 23rd World Tournament where it was used by Goku against its original user, Tien). 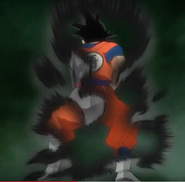