Mifan (ミーファン, Mīfan) is a large empire ruled by Emperor Chiaotzu which is only seen in the movie Dragon Ball: Mystical Adventure.

In the movie, Mifan is the place where a World Martial Arts Tournament is held. Minister Shen and General Tao are working behind Chiaotzu's back to take over his kingdom with the Dragon Balls, but they are stopped by Goku. 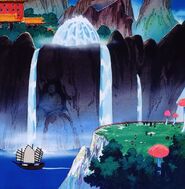 Retrieved from "https://dragonball.fandom.com/wiki/Mifan?oldid=1881937"
Community content is available under CC-BY-SA unless otherwise noted.