This article is about future earthling. For member of Heeters, see Maki.

Maki (マキ, Maki) is an orphan girl in an Future Trunks' timeline. She only appears in the anime.

Maki is a little girl with black hair. She wears a pink, dirty dress along with a green hat given to her by Mai.

Due to the chaos caused by Goku Black and the loss of her parents, both of which likely traumatized her. Maki was a defenseless little girl that ran behind her brother when frightened - simply running away when Goku greets her.

After warming up Trunks and co. when the former made funny faces; Maki is shown to be very caring, consoling Future Mai after she becomes saddened of the fact that she couldn't rescue everyone from Goku Black's assault; she also displays concern for Trunk's well-being and cheers for him during the last battle against Fusion Zamasu.

She's also shown to be observant - while evacuating the area due to Trunks and Fused Zamasu's beam struggle, she immediately spots Trunks' broken blade and courageously runs towards it.

While Maki dies during Infinite Zamasu's attack, she still exists in the second future timeline created by Whis' alterations. 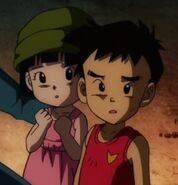 Retrieved from "https://dragonball.fandom.com/wiki/Maki_(Future_timeline)?oldid=1941550"
Community content is available under CC-BY-SA unless otherwise noted.