To perform the attack, Pan screams and releases a large amount of energy from her entire body to knock an opponent back. After performing the attack she does a "striking pose", similar to her father.

Pan uses this attack during her battle against a giant in the 31st World Martial Arts Tournament. After the giant stomped on Pan, the audience were surprised in horror until Pan lifted the giant's humongous foot, unharmed. When a drip of blood begins to pour on her face, she gets angry and unleashes her Maiden's Burst attack, knocking out the giant and declaring her the winner.

Maiden's Burst was named in Dragon Ball Z: Infinite World and Dragon Ball Heroes, where it is one of Pan's skills. In Dragon Ball Xenoverse, Pan uses a variation of the technique called Maiden Burst as her Evasive Skill. 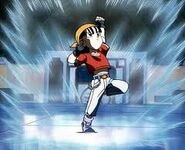 Pan performing a pose while using the Maiden's Burst 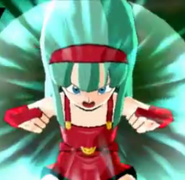