The MB Army (MB軍, Emu Bī-gun) are the main antagonists featured in Dragon Ball: Shenron no Nazo. They appear in stages 11–14 of the game, and act as the final foes encountered. Though their motives are unclear, they appear to be after the Dragon Balls, as Goku finds one of the balls at the end of each level after confronting the army's minions.

The major members of the army were designed by Akira Toriyama.

Kurilien appears working as a hitman for Monster Carrot, but is beaten by Goku. Later, when Goku goes to Konpei Tower to obtain the Four-Star Dragon Ball, he battles and defeats the MB Army, including their General, and obtains the Dragon Ball.

The MB Army General (M・B軍将軍, Emu Bī-gun Shōgun) is high-ranking official in the army (possibly their leader), he appears as the second to last enemy in Konpei Tower.

Kurilien (クリリアン, Kuririan) is first seen working under Monster Carrot, he appears to be a member of the army, as he bears their insignia on his gi. He battles Goku both in space and in Konpei Tower.

Kurilien resembles Krillin, even wearing the Orin Temple outfit. The sprite in the game looks much different, due to the obvious graphics constraints of the time. Kurilien appears to have a long, alien-esque head, large pointy ears, and sharp teeth. In the concept art, he wields a spear and nun-chucks, and is described as the "#1 assassin in the universe". However, in the actual game, he does not wield any weapons and is incredibly easy to defeat. 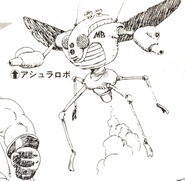 Shogun sprite
Add a photo to this gallery
Retrieved from "https://dragonball.fandom.com/wiki/MB_Army?oldid=1835951"
Community content is available under CC-BY-SA unless otherwise noted.