All Dragon Ball movies were originally released in theaters in Japan, typically when the vast majority of Japanese school children are on spring and summer vacations in March and July, although it pairs up with a Dr. Slump movie, usually 60 minutes long. All of the movies have been released in the United States, and are usually released under a shorter title. Akira Toriyama, the artist who created the franchise, had little to do with the movies past some of the character designs.[citation needed] However, he is listed as the creator of the movies in the credits. In Daizenshuu 6 (released in 1995), Akira Toriyama stated that he considers the movies to be stories in a "different dimension" than the main story of the manga he created.[1] Daizenshuu 7 lists only Dead Zone and Cooler's Revenge in the main timeline. 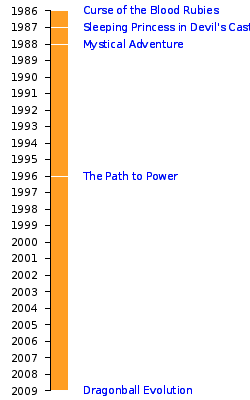 Movie 1: Curse of the Blood Rubies


Premiering on December 20, 1986, this film features an alternate scenario to the Emperor Pilaf Saga, set in a parallel world.


Premiering on July 18, 1987, this film features an extended version of the story of how Goku and Krillin began their training with Master Roshi.


Premiering on July 9, 1988, this film features an alternate scenario to the Tien Shinhan Saga, set in a parallel world.

Movie 4: The Path to Power


Premiering on March 4, 1996, this film is an altered re-telling of the Red Ribbon Army Saga.

Premiering on July 15, 1989, taking place after the end of Dragon Ball but before the start of Dragon Ball Z, this movie introduces the antagonistic Makyan race led by Garlic Jr. - who would return in the filler Garlic Jr. Saga.

Premiering on March 10, 1990, taking place after the Attack of the Saiyans but before the Battle on Planet Namek, this film featured Dr. Wheelo attempting to obtain Goku's body for himself.

Premiering on July 7, 1990, set during the Battle on Planet Namek, this movie featured the renegade Saiyan Turles attempting to use Earth to grow the Tree of Might, so he could eat its fruit and become the strongest in the universe.

Premiering on March 9, 1991, and also set during the Battle on Planet Namek, this movie featured the evil Super Namekian Lord Slug, who aimed to reclaim his youth and convert Earth into a vehicle.

Premiering on July 20, 1991, set after the Battle on Planet Namek but before the Android conflict. This movie debuted Frieza's brother Cooler, who attacked Earth to try and get revenge for his brother's death.

Movie 6: The Return of Cooler

Premiering on March 7, 1992, set after the Battle on Planet Namek but before the Android conflict. Cooler returns after having merged with the Big Gete Star and attacks New Namek.

Premiering on July 11, 1992, set during the Android conflict in a parallel world this movie sees the debut of three androids who were destroyed in the main timeline as they attempt to fulfill their objective of killing Goku.

Premiering on March 6, 1993, set during the break before the Cell Games, this movie introduced Broly the Legendary Super Saiyan and the Z Fighters first conflict with him.

Premiering on July 10, 1993, set shortly after the Cell Games, this movie features the Galaxy Soldiers attacking Earth, with Goku dead, it is up to Gohan to step up and stop them.

Premiering on March 12, 1994, set early during the Majin Buu Conflict, this film features Broly appearing once more and battling the Z Fighters again.

Premiering on July 9, 1994, set during the Majin Buu Conflict, this film features the clone of Broly: Bio-Broly, who is encountered by Goten and Trunks

Premiering on March 4, 1995, set during the Majin Buu Conflict, this film introduces Goku and Vegeta's Fusion Dance self: Gogeta to defeat Janemba - who has been causing trouble in the Otherworld.

Movie 13: Wrath of the Dragon

Japanese title: "Dragon Fist Explosion!! If Goku Won't Do It, Who Will?"
FUNimation title: "Wrath of the Dragon"

Premiering on July 15, 1995, set after the Majin Buu Conflict, this film shows the conflict between Tapion and Hirudegarn, with the Z Fighters aiding in bringing it to a close.


Premiering on February 21, 2015 as the second part of the Gods of the Universe Saga, this movie features the return of Frieza, who attacks Earth as Golden Frieza and battles Goku and Vegeta in their new Super Saiyan God Super Saiyan forms. It was later adapted into the Golden Frieza Saga.


Premiering on December 14, 2018, this film is set after the Tournament of Power and introduces Broly and Gogeta into the main Dragon Ball story.

Special 1: Bardock - The Father of Goku

Special 3: The History of Trunks

Special 4: Looking Back at it All: The Dragon Ball Z Year-End Show!

This is the Ultimate Battle in all the Universes! Son Goku vs Jiren!!

FUNimation title: "This is the Ultimate Battle in all the Universes! Son Goku vs Jiren!!"

Right Before the Dragon Ball Super Movie Debuts! Looking Back on the TV Show’s Climax

OVA 1: Plan to Eradicate the Saiyans

Two OVA, the original released in 1993, and the shorter remake released in 2010. They are both part of the overall Plan to Eradicate the Saiyans series.

An cinematic attraction that debuted at Universal Studios Japan. It primarily depicts a CG animation of Goku vs. Frieza, presented as a 4D attraction. The event was held from July 1 to September 4.

A cinematic attraction at Universal Studios Japan and the successor to Dragon Ball Z: The Real 4-D. Like it's predecessor it is a new installment in the Dragon Ball series, this time primarily featuring the face off between Super Saiyan Blue Goku and Vegeta against Broly God.

An American film made in 2009, combining elements of the Emperor Pilaf Saga with the King Piccolo Saga, and putting the story in a more real world perspective.

Retrieved from "https://dragonball.fandom.com/wiki/List_of_Dragon_Ball_films?oldid=1912538"
Community content is available under CC-BY-SA unless otherwise noted.