Light of Divine Justice (正義の光, Seigi no Hikari) is a powerful thunderstorm-like energy wave utilized by Fused Zamasu in the anime in order to transform into an "ugly form".

This technique is summoned when the user calls its name and raises up his/her arm. A few moments later, the energy storm will strike the user's hand, damaging the arm severely. While this is proven to be a self harming technique, those who survive it will gain immense power.

Fused Zamasu, after his face was scarred by Goku's God Kamehameha, calls upon the Light of Divine Justice to spread his mutation to his arm - causing it to become larger, much more muscular and exposing his scarred flesh - but also increased Fused Zamasu's power. His aura also changes into a fusion of Future Zamasu's purple aura on the inside and the dark red outer part of Super Saiyan Rosé Goku Black's aura.

This increase allowed Fused Zamasu to power up even further, which forced Goku and Vegeta to fuse into Vegito to even the odds.

This technique makes a debut in Dragon Ball Xenoverse 2 as two variations. The main version, like in the anime, was used to injure him into his Grotesque state. The Light of Divine Justice also appears as a Super Attack exclusive to Fused Zamasu, allowing him to fire an electrical like energy wave out of his eyes. 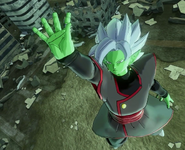 Fused Zamasu calling upon the Light of Divine Justice in Xenoverse 2.
Add a photo to this gallery
Retrieved from "https://dragonball.fandom.com/wiki/Light_of_Divine_Justice?oldid=1827147"
Community content is available under CC-BY-SA unless otherwise noted.