The Day of the Saiyans

One Down...
"Let the Games Begin!" (ベジータのゲーム, Bejīta no Gēmu, lit. "Vegeta's Game") is the twentieth chapter of Dragon Ball Z and the two hundred fourteenth overall chapter of the Dragon Ball manga.

The cover of this chapter shows various characters and writing all inside little square panels. The characters include Piccolo, Gohan, six Saibamen, Krillin, Vegeta, Nappa, Tien Shinhan, Chiaotzu, and Yamcha. The covers of the later chapters "The Mysterious Strangers" and "Trunks Surpasses His Father!" are similar to this cover art.

Piccolo asks them what the hell they want, and Vegeta recognizes his voice as the one who killed Raditz. Piccolo wonders about this, and Vegeta explains that their eye devices are also communicators. Nappa asks Vegeta if Piccolo is not a Namekian, and Kuririn and Gohan ask him if he is also an alien. Vegeta says he has heard Namekians have strange abilities and can use magic and stuff, so he must be the one who made these Dragon Ball things.

Kuririn wonders how they know about the Dragon Balls, and then Piccolo thanks them for the tale about his past, but he was not the one who made the Dragon Balls. Piccolo then prepares for them to attack. Up at God’s Palace, God says he did not know he was an alien. He always did think he was a little different from everyone else, though. He had created the Dragon Balls, but perhaps someone else on Planet Namek had created something like the Dragon Balls. He does not seem to remember. Nappa says that since he will not tell them about the Dragon Balls, he will force him to say it. Nappa reads off their battle powers (Kuririn – 981, Piccolo – 1,220, Gohan – 1,083), and cannot believe they plan to oppose them at such low levels. Vegeta then tells Nappa to remove his scouter, which is their eye device. These guys can change their battle powers at will, so the numbers are no good. Nappa thinks that weakling Raditz had relied on his scouter’s figures too much. Kuririn and Piccolo cannot believe that they called Raditz a weakling.

Vegeta tells Nappa to plant six Saibaimen, and Nappa says Vegeta really likes to play. Nappa pulls a little bottle out and plants six little seeds in the ground right in front of them. Then he pours some liquid from the bottle to make them sprout right away. Six freaky little plant monsters emerge, and Vegeta tells them to attack the three over there. But then Tenshinhan and Chiaotzu show up, followed shortly by Yamcha. Vegeta thinks it will be fun with six Saibaimen verses the six of them now. “It’s a game!”

Piccolo gets pissed that he thinks this is a game and wants them to stop screwing around, and Kuririn tries to tell him to let it alone, since this will allow them to buy time for Goku to arrive. Tenshinhan volunteers to go first, and Vegeta sends out a Saibaiman. The Saibaiman rushes at him, but Tenshinhan just blows it back. Tenshinhan comes at it, but the Saibaiman then splits its head open and shoots out a liquid at him. Tenshinhan easily avoids it, and Kuririn and Piccolo just barely get out of the way before the stuff burns through the ground like acid. Tenshinhan then gets in a quick elbow to the face, and knocks the Saibaiman out. Nappa freaks out, but Vegeta thinks this will definitely be fun.

Nappa reveals that Piccolo is a Namekian

The Saiyans and the Saibaimen 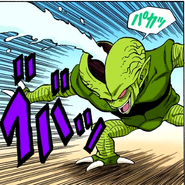