Hidden Blade
Switchblade
A knife (ナイフ, Naifu) is a type of blade weapon.

It is generally small, although its most distinguishing characteristic is that it has one sharp edge.

Emperor Pilaf uses a switchblade to threaten an alligator on Roshi's island when he interrogates him, forcing him to tell him where Master Roshi is.[1]

Launch uses knifes when cooking, even chasing Krillin with a butcher's knife on Training Island after she turned into her evil form when he asked a brewsky for Master Roshi. Launch then sneezes again and, in doing so, she throws the knife in the air and it lands right in front of a frightened Krillin.[2] Bulma, Oolong, and Chi-Chi also uses knifes when cooking, and many of the other Dragon Team member use them when eating.[3]

After his conversion into a Cyborg, Mercenary Tao has his left arm conceal a blade, which he uses to slice Tien Shinhan in the chest in their match in the 23rd World Martial Arts Tournament, such an action leading to his being disqualified from the tournament due to weapons usage being banned in the tournament.[5]

In King Kai's story about the Saiyan-Tuffle war a female Saiyan can be seen nonchalantly holding a dagger in her mouth by the blade. Gine also used knives and meat cleavers as a meat processing employee after retiring from the Saiyan Army.

In Dragon Ball Z: Broly - The Legendary Super Saiyan, during Paragus's flashback to how King Vegeta nearly had both himself and his son Broly executed, it was shown that the latter was stabbed with a dagger by a Saiyan guard, which nearly killed him.

In Dragon Ball Super: Broly, during the Occupation of Planet Vegeta Gine utilizes a meat cleaver in her job as a meat processing employee and she died holding her meat cleaver during the Genocide of the Saiyans after Bardock was overpowered by Frieza's Supernova.

In Dragon Ball GT: A Hero's Legacy, Mamba wields a large oversized kitchen knife which she attempts to use to kill and crave up Goku Jr. and Puck with while they are sleeping though Puck had deduced there was something suspicious about her human guise and she ended up only stabbing the bed before leaving the room to pursue them. She is later seen wielding the knife when she corners them in the kitchen where she cooks her human prey.

In Dragon Ball Xenoverse 2, the Camo Bikini features a holster with a sheathed combat knife on the wearers left leg. However like other weaponry worn as part of certain clothing options it is purely cosmetic. 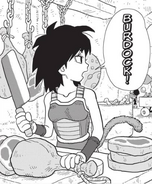 Gine holding a meat cleaver in Dragon Ball Minus

General Blue threatening to kill Arale in the manga

Mamba about to attack Puck and Goku Jr. in A Hero's Legacy

Mamba about to stab the bed in A Hero's Legacy

Emperor Pilaf threatening to stab the alligator on Roshi's island

Retrieved from "https://dragonball.fandom.com/wiki/Knife?oldid=1929493"
Community content is available under CC-BY-SA unless otherwise noted.