King Nikochan's spaceship (ニコチャン大王の宇宙船) is a spaceship that is driven by King Nikochan and his servant. It can be seen in the sky at night in Chapter 2 of Dragon Ball, "No Balls!".

King Nikochan's spaceship has a special laser that can destroy an entire planet, as seen when he destroys Mars trying to impress Arale Norimaki and Gatchan in Dr. Slump. This spaceship is eaten shortly later by Gatchan, while King Nikochan was attempting to conquer Earth.[1]

King Nikochan later gets another ship when he gets back to Planet Nikochan. The second spaceship is shot down by the Penguin Village Police Force, specifically Charmy Yamada's Rocket Launcher, when they mistake the Nikochan-seijin for the Red Ribbon Army.

In Daimaō Fukkatsu, a ship similar is used by an alien named Synthesizer who attacks Penguin Village.

In Dragon Ball: Origins 2, it is driven by King Nikochan and his servant during the boss fight in level 4-2, and destroyed by Goku. It is repaired in the bonus level 4-4, but Arale breaks it and it ends up eaten by the Gatchans while they were helping the Nikos collecting trash. 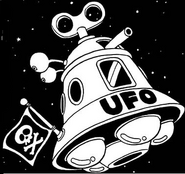